Twenty-three days ago, Stephen Sambu put on track spikes. It was his first time racing in them in 19 months.

Sambu, from Kenya, ran a personal-best 26 minutes, 54 seconds, in the 10,000 meters at the Prefontaine Classic in Eugene, Ore., on May 30. It was his first track race in more than two years.

The surface, and the result, was familiar, and Sambu’s fresh-from-the-track fitness helped him surge past Mutai around mile five, at Fairfield Street, to realize a lead he wouldn’t relent.

“These guys have already tested themselves in track, and normally for me I was road running,” Mutai said after the race, beads of sweat coating his eyelids. “If I do a competition in track and come here, my performance is different.”

“It means a lot to me,” Sambu said, his neon singlet coated to his skin. “I am so happy. It makes me feel like I’m improving.”

Sambu, a former six-time NCAA All-American at the University of Arizona, won last year’s race in 28:06, nine seconds ahead of 2013 marathon winner Lelisa Desisa. Sambu’s 27:25 is the fastest in the world this year, and his fastest ever non-track 10K.

“He’s been racing really well this whole year, and training well,” said Sambu’s coach, James Li. “Of course Mutai is a great, great runner. Beating him is a big deal, and obviously you’re not sure that’s gonna happen. But other than that we knew he was gonna run strong, and he was gonna do very well.”

After the pack of men’s elite runners weaved through Back Bay together through a 4:30 first mile and 4:26 second, Sambu and Mutai began to distance themselves.

“Our plan from the beginning,” Sambu said, “was to make the pace to be high.”

The third mile was slower — 4:29 — and countrymate Daniel Salel, in a bright orange singlet, joined Sambu and Mutai. Then the trio clipped off a 4:19 fourth, before Salel fell off.

“I was thinking like, after 8K, I knew I still have 2K,” Sambu said of the mark where he set a course record in 22:01. “So I was like, ‘OK, let me increase the pace.’ Because I was just thinking about finishing. Because I was feeling tired, too.”

He did. Mutai fell off, and Sambu ran the last mile by himself, crossing the finishing tape with his arms raised, spent and triumphant.

“I was feeling good,” said the understated 25-year-old.

Mutai, meanwhile, was not dissatisfied with the runner-up finish.

“I still have to do a little training, because I’m still not [in top shape],” he said. “So for me it was a good performance.”

“I didn’t expect to run such a fast race today,” Daska said through a translator. “I’m so happy that I won.”

Her plan, she said, was uncomplicated: stay in the lead, monitor the other runners, and surge, if needed.

“I know that all the runners who were staying behind were good runners,” Daska said. “And I have confidence that I’m gonna win. In the meantime, I’ve been watching them making sure they are not gonna push me and then pass me. I am so happy my strategy worked out.”

Behind the elites, of course, was everyone else, the Sunday Warriors, who clapped and cheered on the leaders as they ran opposite directions of one another along Commonwealth Avenue.

There were 8,000 entrants to this year’s race, a record, and after the 6.2 miles of morning glory there were bananas and T-shirts and awards.

It was unknown if any of those runners had run a 10K on a track in Oregon to prepare for the race. 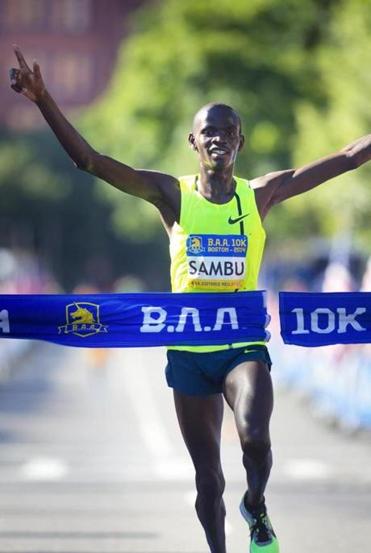 The Kenyan Dollar millionaire cooking ugali at US Cultural Fete

Raila should step aside for Kalonzo in 2017: Mwanzo