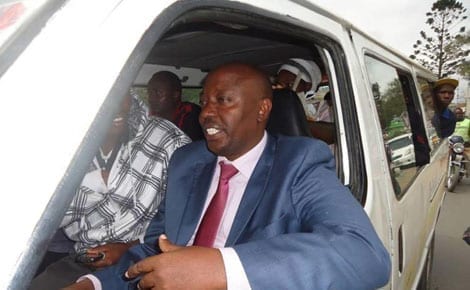 Politics is a very ugly game. You have to know your way around scheming, cheating and selling your story. This week we’ve been treated to the falling out story of Machakos Governor Alfred Mutua and his deputy Bernard Kiala .

Mr. Kiala had claimed that his official vehicle was withdrawn by his boss, immediately after he was kicked out of a cabinet meeting. He said that he was forced to walk for about 5 kilometres before taking a matatu to Nairobi.

It is emerging that Kiala may have stage managed the whole thing. In a press statement sent yesterday from Mutua’s office, the story was cooked and the truth is Kiala’s car was never withdrawn and he did not take a Matatu to Nairobi.

There are even CCTV photos to prove that.

Here’s the full statement plus the images.

There has been reports in the media that Machakos County’s Governor Bernard Kiala had his security withdrawn and that his car was taken from him forcing him to use a Matatu.

These allegations are inaccurate and were stage managed by Mr. Kiala for reasons known to himself.  The truth and evidence is as follows:

1.  HE HAS TWO CARS ASSIGNED TO HIM

On Monday, July 7, 2014, one of the two Prado’s – KBY 215 B, had the plates removed so that they could be sent  to  Kenya  Revenue  Authority  for  alteration from civilian to green County Government plates, as per requirements.   In the meantime, even  though  he  has  another  Prado assigned to him, he was assigned a Subaru Outback to ensure his fleet of two cars was intact.

As clearly demonstrated by CCTV cameras, After Mr. Kiala left the Cabinet meeting at the governor’s office, he rode in his assigned Government Subaru Outback to his office. He then proceeded to call a press conference and lie that he had walked for 5 kilometres. He then walked to the main road, climbed into a Matatu for a stage-managed photo shoot.

He then alighted from the Matatu, went back to his office where he stayed for a while before driving out of town in his assigned Government Subaru Outback.

Therefore, the allegations that Governor Mutua had deprived him of his car are unfounded and far from the truth. Numerous witnesses and CCTV cameras can attest to this.

It is not clear why Mr. Kiala has decided to engage in these actions and to mislead the public. We hope it will become clear with time what campaign, if any, Mr. Kiala is engaged in.

I’ll not say that this confirms Kiala is lying, but at least it confirms Machakos CCTVs are working.