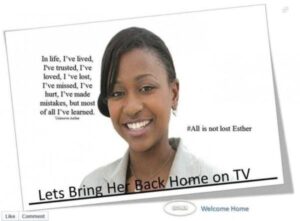 All hope is not lost for Esther Arunga as Kenyans have come out with a campaign to bring the once TV darling home.

The campaign which is moving quickly on a Facebook page has garnered more than 6,500 page likes with pictures of Arunga’s family and latest stories being shared on the page.  The cover photo bears #All is not lost Esther with a quote saying, “In life, I’ve lived, I’ve trusted, I’ve love, I’ve lost, I’ve missed, I’ve hurt, I’ve made mistakes, but most of all I’ve learned”, by an unknown incorporated with her picture.

Arunga was released on bail last week after she confessed that her husband, Quincy Timberlake, had killed their son. She told police the child flew backwards onto the ground and that the child tried to seek shelter with her and she picked him up.

Quincy Timberlake then allegedly threw the boy into a wall with such force it left dents. Dents in the wall were observed by investigators at the crime scene. Her husband punched the child hard enough to “take a grown man down” while trying to expel demons and aliens.

The question lingers, will Kenyans succeed in bringing the troubled Esther Arunga back home? Will she finally live in peace away from all the drama?

Many Kenyans have sympathized with the former TV personality and want her back home. Here are some of the posts on 100,000 signatures to bring Esther Arunga home.

Mike de Samuel‎: Esther God loves and he will never hate, he’s got inner peace and makes it everlasting. I love you Esther

Jessy Rossy‎: Esther, Kenyan moms love you, you have gone through too much already. Come back home, you are safer here.

Mesh Shach Kasyoka‎: Now can you come back and save not only yourself but your parents, friends and other Kenyan gals. For you to know how much we love you the day of your coming you will find thousands of us at the airport waiting for u.

Masha W. Njue‎: Let he who has no sin be the first to cast the first stone at this beautiful soul…Girl we are praying for you day and night. May the good Lord grant you peace, healing and cause your destiny to fall back into God’s plan now in Jesus Name.

Jeff Naibei:‎ We all have our up and down .seek your forgiveness from God and your parents. welcome back home

Ann Annita Hannah‎: Come back home darling. we love u so much

UK based Kenyans to receive ‘Dr’ title for charity works