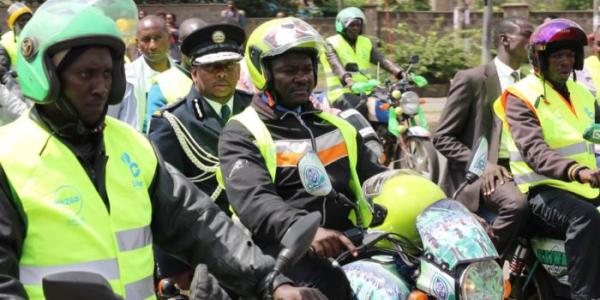 Boda boda operators in Migori and other towns in the county Wednesday demonstrated against the humiliation of President Uhuru Kenyatta.

Uhuru was heckled on Monday during a tour to Migori town.

The midday protests caused a major traffic snarl-up on the Kenya-Tanzania highway.

The group’s leader Jack Oloo said they do not want to be used by politicians.

They marched on the Migori-Kakrao road, ‘cursing’ the youth who embarrassed theHead of State.

The function, attended by Uhuru and other Migori leaders, was meant to be the launch of an anti-malaria project.

It was held at Migori Primary School grounds.

The boda boda operators denied reports that they were part of the mob that humiliated Uhuru.

“Those who caused the chaos in Migori town were hired youths sent to disrupt the meeting. Our members will always channel their grievances through the laid down structures in the county,” said Oloo.

Suba Council of Elders chairman Japheth Riogi asked the government to arrest and prosecute all those who heckled thePresident.

Migori Rev George Kangie said there is a need for leaders to eradicate hooliganism.

“We need sobriety in efforts to better the society,” he said. – The Star