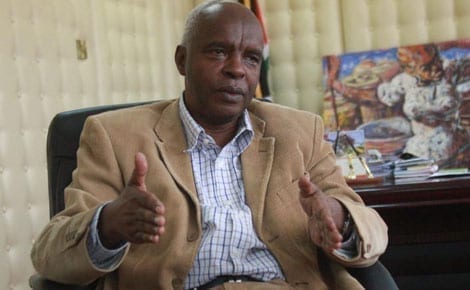 FIVE people were shot and injured yesterday in Makueni, including Governor Kivutha Kibwana’s chief of staff, when chaos erupted at a meeting convened by a group of MPs plotting Kibwana’s downfall.

A group of demonstrators burst into the Makueni Assembly, baying for the blood of area MPs, the senator, MCAs and the women’s rep, who had locked themselves in the speaker’s office apparently to plan the governor’s impeachment.

The leaders had purportedly attended a consultative meeting over the Standard Gauge Railway land acquisition process in Unoa Grounds. They were also to conduct a prayer session in the assembly to cleanse the chamber of reputed evil spirits because a witchdoctor known as Mulika cast a spell on the assembly last year.

However, word spread among the locals that the meeting in the assembly was discussing Governor Kibwana’s removal.

All hell broke loose when Kibwana, who is said to have been invited by some MCAs, tried to join the meeting, but his path was blocked by security guards hired by the assembly.

His furious supporters tried to force open the gate so Kibwana could enter the premises. In the ensuing commotion, the speaker’s security aide and those assigned to the Majority leader fired live bullets into the charging mob.

Among those who were shot during the fracas were the governor’s chief of staff, Douglas Mbilu, his personal aide William Kinoti, the assembly’s Serjent-at-Arms Brian Mutua, a pastor and a former councillor identified only as Orengo.

They were rushed to Makueni Hospital for treatment. Mutua, who was shot several times in the stomach, was transferred to Nairobi for specialised treatment. The mayhem put an end to the meeting.

Speaking to journalists in his office after the incident, Governor Kibwana said that the bullets were meant for him. “I heard someone say,’this small man has finally come, it’s time we finish him’, then the gunshots begun’’, Kibwana said.

On their part, the MPs and the MCAs who spoke outside the chamber blamed the governor for the chaos. They called on the police to do thorough investigations and bring the perpetrators of the violence to book.

Senator Mutula Kalonzo Jnr, who spoke on behalf of the other leaders, claimed that the governor attempted to force his way into the meeting accompanied by armed hooligans. He condemned the violence, adding that there is a “serious” disconnect between the county government of Makueni, the county assembly and elected leaders.

“The impasse has caused, and will continue to cause, the delay of development in Makueni, which is a major concern,” said Kilonzo.

He also said there are certain issues in the county government’s expenditure in the last financial year that have not been addressed – such as failure to fully implement the 2013-2014 budget.

Area OCPD Phillip Opiyo said investigations have started and that those behind the chaos will be arrested. He said it could not be immediately established who fired the shots. Opiyo pledged that the assembly will be accorded maximum security and confirmed the governor recorded a statement about the mayhem.

Before Kibwana’s arrival, a charged crowd chanted outside the assembly, demanding that Kibwezi West MP Patrick Musimba come out of the meeting and defend his development record. They questioned why the MP was branding Kibwana as incompetent, claiming that his own record was wanting.

The Raila question at ICC -Video Emotions play in courtroom