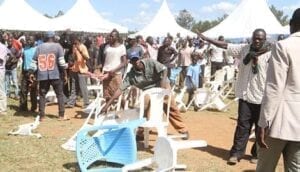 Six people suspected to have participated in disrupting President Uhuru Kenyatta’s rally on Monday this week have been charged at a Migori Court.

State counsel Kenneth Kiruai told the court that the six had been positively identified as having committed the offence that plunged the presidential rally into chaos.

In their defense, however, the suspects’ lawyer Rodgers Abisai dismissed the charges as flimsy and lacking proper evidence.

“There is no clear evidence incriminating these people of the said charges, your honor,” Abisai said.

The mood was pensive as the accused’s supporters jammed the court room for the proceedings.

Magistrate Nyaga later released the accused on a cash bail of Sh5,000 with a surety of the same amount each until October 1 when the case will be heard again by the same court.

Police officers had earlier brought the accused in under tight security as thousands of wananchi including relatives thronged the court.

The incident has thus far drawn a lot of condemnation from all over the country.