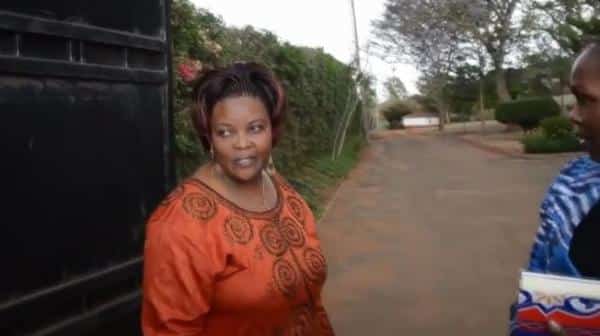 The first wife of Machakos Senator Johnstone Muthama invited Fida officials to her home in Kitanga, Machakos on Tuesday to explain alleged woes in Muthama’s hands.

Agnes Nduya, popularly known as Pastor Agnes, said Muthama on Monday sent their son Moses to unhinge her bedroom door so as to drive her out of their house. She said Muthama intends to convert the over 30-bedroom house with a swimming pool into some kind of resort.

She accused Muthama of planning to kick her out of their matrimonial home for no valid reason and with no discussion.

Nduya told the women lawyers that she has gone through a lot of anguish in the past years.

She said her marriage took a different turn after the referendum campaigns in which she took a stance different from her husbands. Her husband supported the constitution.

She said that Muthama soon after confiscated her Toyota Prado.

Nduya also accused Muthama of emotional abuse through actions such as telling their security guards not to let her in after 7pm.

She does evangelistic work in the Mua area and is a staunch member of Kyemutheke A.I.C. church.

Report on Haiti visit, reality on the ground by Dr. John Kivuva