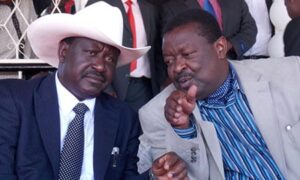 Kenya: Today could be an important landmark for Raila Odinga’s Orange Democratic Movement in the journey to the 2017 elections given that its highest decision-making organ is to ratify or reject the proposed new leadership drawn from the party’s two camps.

The new team Raila will be seeking to have installed is to champion the task of repositioning the party, recently rocked by internal wrangles on the road to 2017.

Plagued by persistent wrangling since February when party elections ended in chaos, ODM resorted to a boardroom deal to accommodate key figures from rival camps in an expanded leadership structure that will be considered by the National Governing Council (NGC) today.

The National Executive Committee (NEC) and the Transitional Independent Executive Committee (TIEC), an interim organ formed after the bungled polls that drew representatives from the warring camps, last month proposed 27 party national officials. However, the national office bearers angered some party members, including Raila’s close allies, who claimed the camp perceived to be packed with ‘ Jubilee moles’ had secured powerful positions.

Today, the NGC is to either endorse or reject the proposed list of party officials, and interviews by The Standard yesterday indicated members still held divergent views.

Namwamba fiercely fought for the position with nominated Senator Agnes Zani who was associated with a rival camp said to be favoured by Raila. In the proposed new lineup, Zani and nominated Senator Elizabeth Ongoro have been named deputies to the secretary general.

In the lead-up to the bungled polls, Namwamba’s camp had Joho and Turkana Governor Josphat Nanok, who is designated as one of the two deputy national chairmen.

The other deputy national chairman is Funyula MP Paul Otuoma, who is among those who have rejected the list and demanded competitive elections.

On Thursday, Otuoma called on the National Delegates Conference (NDC) to exercise its duty wisely and save the party from collapse. “The delegates should not be used to rubber-stamp a preconceived list of leaders. What happened in Naivasha is wrong because we can’t solve our party problems by having a few people lock themselves up in a hotel room and draw a list of leaders,” Otuoma said.