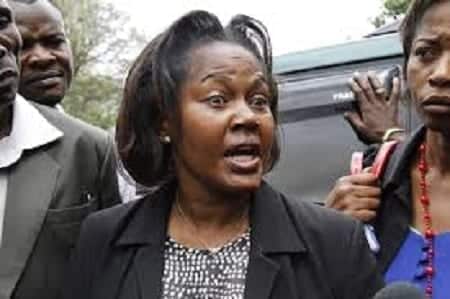 Senator Otieno Kajwang’s second wife Faith Vivian Otieno claims she has been cut off by her husband’s family. She also says, her children are unable to access money raised by Kajwang’s friends for their education, The Nairobian can exclusively reveal.

Kenyans recall how Faith bitterly stormed Lee Funeral home demanding to view her late husband’s body and the dignified silence at the funeral in Homa Bay that lit up social media and won her an army of supporters.

Three months on, she says her relationship with the family seems to have grounded to a halt after Kajwang’ died. For the past two weeks, Faith claims, she has been forced to beg and plead with Kajwang’s brothers to send school fee for her daughter, who cleared Form Four last year but can’t join college.

“What is painful is that a harambee was held to cater for the education of Kajwang’s children. Yet right now, my daughter is at home. She can’t go to school even though somebody somewhere has the money that was raised for the children,” states Faith.

Fundraiser She accused the late senator’s brothers of frustrating her and playing hide and seek over her late husband’s estate. “I had to fight for over three weeks to get some money from that family so that my son could go back to university.

What’s wrong with these people?” posed Faith. After Kajwang’ died, there was a fundraiser which was meant to cater for children of the late Homa Bay during and Sh6.7 million was raised. She has never seen a penny, she claims. The legal wife
–sde.co.ke

Determining Factor and top contenders to replace Kajwang’ in…

Kenyan Nursing Students to get Apprenticeship in German hospitals