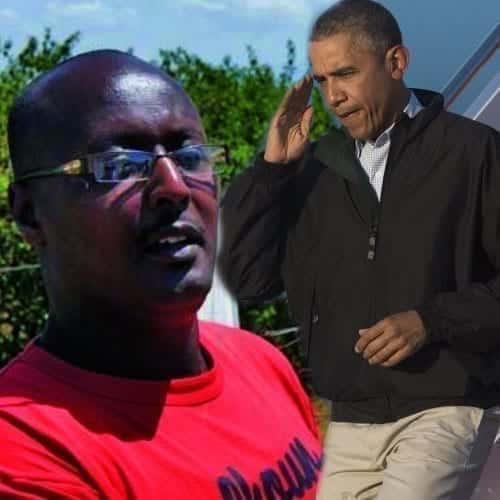 Self-proclaimed chairman of Maendeleo ya Wanaume, Nderitu Njoka (pictured), has said he is the one who invited US President Barack Obama to Kenya and not President Uhuru Kenyatta.

The Global Men Empowerment Network leader claims those linking Obama’s July visit to State House are wrong. He claims to have written a more than 5,000 worded letter to the US president on July 11, 2014, in which he also invited First Lady Michelle Obama and their children, Malia and Sasha to the country. The letter was posted online and Njoka believes Obama read it and decided to visit the country.

“I was actually the first person to invite him and I am sure he read the letter. I decided to invite him because we tend to forget great people from Africa who are global leaders,” Njoka, who is now proposing a Bill to bar women from using contraceptives, told The Nairobian. He added that, “I am expecting State House to call for consultations on the programme I had shared with Obama in the letter.”

The letter reads in part: “As a fellow partner in service of the people, I am concerned and worried that you may not find some time during your tenure as USA President.”

According to the letter Obama was also to enjoy a holiday in “Muruguru Village Nyeri County, where you will at your pleasure enjoy a dish of delicacies of traditional diet of arrow roots, mukimo or kienyeji food, a mixture of maize, beans, njahi, banana, pumpkin and thistleleaves…”

Njoka promised to present a gift of groundnuts, avocados, mangoes and sugarcane to the American president as “we toast to a glass of muratina, a traditional alcoholic African wine made from a combination of water, honey and miratina fruit stabilisers with no additives or yeast.”

According to a White House pool report, Obama will attend the Global Entrepreneur Summit, an annual conference that connects entrepreneurs with business leaders, international organisations and governments in July.