Uhurus’s son under fire for casual handshake with Museveni 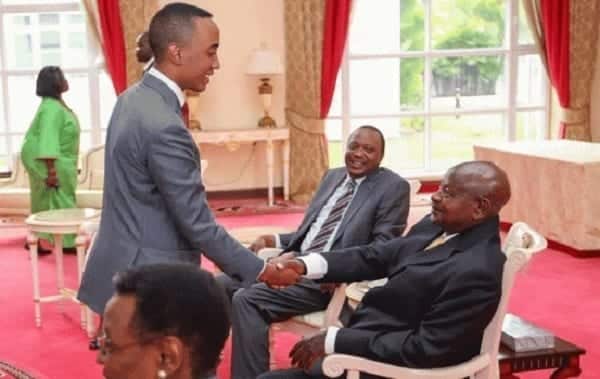 President Uhuru Kenyatta’s son Muhoho’s encounter with President Yoweri Museveni has become a major talking point among Ugandans for the unlikeliest of reasons – a simple handshake.

This is after pictures of Muhoho emerged shaking hands with President Museveni and the country’s First Lady Janet, in what some perceive to be in a too “casual” fashion.

Ugandan culture generally follows that a person bows, kneels down or uses both hands while greeting an elderly person or someone of authority, postures Muhoho seemed to have been oblivious of.

As result, the first son has come under fire from a section of Ugandans on social media for his casual – if not disrespectful – attitude.

“Why doesn’t the kid bend on his knee before greeting the GREAT MAN??,” Gen Saleem wrote on Facebook.

But one Nabirye Patience was of a divergent view:

“Now u people expect him (Muhoho) to kneel. Remember these (Kenya and Uganda) are two different countries and each with its culture and norms. Don’t forget we are now in dot.com (era),”

Lydia Nam meanwhile disagreed with Patience by writing; ” Not kneeling (is ok) but (he should not) stand as though he is talking to his peers. There is something called courtesy when talking or greeting superiors or VIPs. Wama oli mtuufu,”

“Different strokes for different folks. All one needs is a firm handshake, look straight into the eyes of the person you are greeting. Muhoho did all that. He doesn’t need to kneel or bow down,” Owomugisha Regina opined.

Agnes Musyoka stated: “Even women don’t kneel in Kenya… unless kneeling for God,”

Others online users were less concerned with the handshake debate but more interested in the young Kenyatta’s looks and supposed similarities with President Museveni’s son Muhoozi. .

“Nga he’s  (Muhoho) so handsome. Someone send me his number, email address, tweeter account…. I want to know him better,” Christine Nakiyega wrote.

Uhurus’s son under fire for casual handshake with Museveni