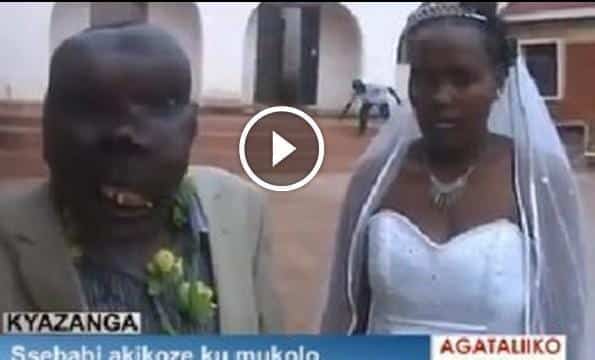 This news report of a special wedding taking place in Kyazanga which is a town somewhere in Uganda is between a woman and guy who apparently isn’t what an ordinary woman would dream about. The man has been born with a very strange disability that has caused his face to form in a different way. His facial features are totally different from what we see or we personally have. This woman has chosen to marry a man despite his shortcomings. Nonetheless it still isn’t sure if the woman has agreed on marrying the guy or has been pressurized to do so because what seems visible through her body language and expressions is fear and regret. Since the video is in some other language we don’t really know what the truth is.

Godfrey Baguma, 47, who is believed to suffer from a rare, unknown … Before his marriage to Kate, Godfrey

Update:Prayers and Fundraiser for Moureen and Baby Kyan in California and Virginia

Duale To Receive Bill Seeking To Pull Kenya Out Of ICC

PHOTOS: Uhuru Meets Politician Who Accused him of Smoking Bhang