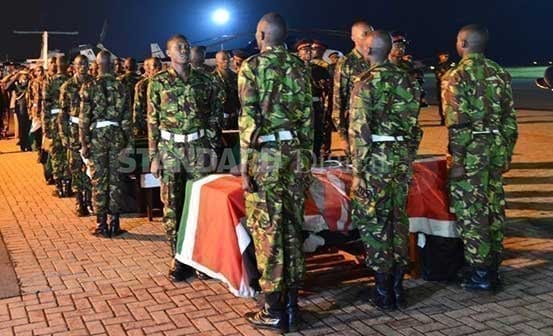 Bishops Road in Nairobi, Kenya, is one to avoid if walking or driving in a hurry to your destination. Why? Because it has a permanent road block manned by uniformed and plainclothes armed-to-the-teeth, hard-nosed, para-military General Service Unit. All vehicles (and sometimes pedestrians) are subject to mandatory checks before they can proceed with their journeys. That is the new norm that modern terrorism has forced on Kenya and on the world.

On the morning of January 15, 2016, that new norm must have been in place at El Adde in Somalia when Al Shabaab terrorists attacked a base of the African Union Mission in Somalia (AMISOM) and inflicted heavy casualties on a company of Kenya Defence Forces.

And before the week was over, Al Shabaab detonated a bomb and shot their way into a popular restaurant at Lido Beach, Mogadishu, killing more than twenty people who were out eating and enjoying afternoon breeze from the Indian Ocean. Al Shabaab’s mission of gruesome killings continues.

Somalia has been in a state of war since the overthrow of strongman Siad Barre more than 25 years ago. After years of civil war, Islamic Courts took over Mogadishu and tried to enforce a strict form of Sharia Law that included a dress code, they banned entertainment music, soccer and even men who didn’t grow long beards were flogged in public as a punishment.

Terrorism is a tactic used by combatants to cause maximum terror through horrific murder of men, women and children, as a means of achieving religious or political objectives. History is full of such. In 1983, terrorists struck US forces in Lebanon, killing about 300 people.

The 1998 bombing of the US Embassy in Nairobi, Kenya, killed more than 200 people service men. The 9/11 attacks in New York killed more than 3000 people. Recent gunning down and bomb attacks in Kenya, France, Egypt, US, Burkina Faso, India, Indonesia, Pakistan, Nigeria and now Somalia show that modern terrorism is global and is the biggest threat to world peace.

More so because, the depraved young men and women who cause so much suffering to fellow human beings, are brain-washed to believe that Islamic extremism is ordained by God and that those who maim, rape and kill other God’s children, do so on God’s behalf.

And that is why we salute the young men and women in uniform whose duty and honor it is to fight extremism wherever and whenever it is found. The KDF company that was attacked at El Adde in Somalia represents the pride of Kenya.

They stand for true Kenyanness. That quality that makes Kenyans tolerant, warm, welcoming and respectful to people from all corners of the globe who live, study or work in the country. Those brave souls are the heroic defenders of African freedom and human dignity. Without them, the world is poorer. But, because of their sacrifice, the world is a step closer to victory over extremism.

Kenyans Who Fought In World War 2 Honoured By The Queen

IT MAY NOT BE THE IDEAL PLACE, BUT GOD WILL BLESS YOU ANYWAYS

Why Kenyans get killed in South Sudan