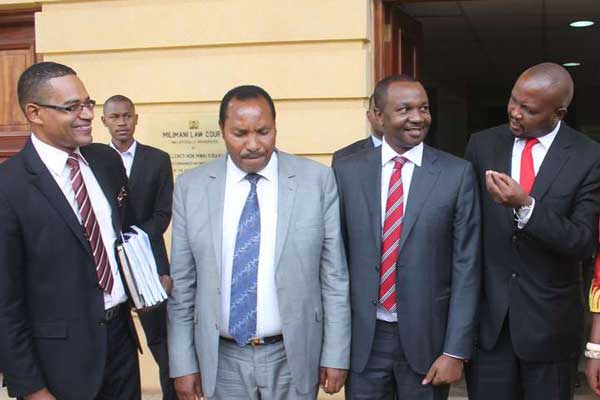 The High Court has stopped Cord leaders from storming into the Independent Electoral and Boundaries Commission offices.

The order was issued Friday by Justice Isaac Lenaola.

He issued the order in a case filed by five MPs against the three opposition leaders.

The MPs wanted the court to stop Cord leader Raila Odinga and his co-principals Kalonzo Musyoka and Moses Wetang’ula from continuing with their bid to storm into the electoral body’s premises countrywide to demand the removal of its commissioners from office.

Minutes after Justice Lenaola issued the order, Cord announced that it had called off the protest that was set to take place on May 4.

A statement sent to newsrooms by Mr Odinga’s spokesman, Dennis Onyango, stated that the “occupy IEBC” protest had been deferred to May 9 in honour of former First Lady Lucy Kibaki, who passed away in London.

“In honour of the former First Lady the late Lucy Kibaki, and in compliance with the three day national mourning to be announced when her body arrives on Sunday, the Coalition for Reforms and Democracy has called off the occupation of the IEBC headquarters,” the statement read.

The Jubilee MPs accused the opposition leaders of sabotaging the Constitution through their acts, which they described as unlawful and intended to poison the minds of voters as well as sow politically explosive seeds of discord and doubt against the poll commissioners.

While defending the current commissioners, they claimed that should the threats issued on Tuesday be effected, the actions would be in complete violation of the Constitution since the office holders have not completed their six-year term in office as required.

“No extra-judicial or extra-legal methods of removing sitting commissioners, embarked upon by the sued parties, are contained in the Constitution, therefore, this court cannot blink at such blatant violations,” they said.

All is Vanity: What is the meaning of Life- Series 1 (VIDEO)