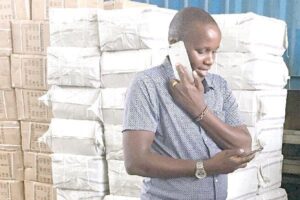 Let’s first get the pleasantries out of the way, shall we? Ni hao ma? Have you been keeping well? Good! So, today, I am going to tell you about China’s ‘Little Africa’. Yes, a city in China where trade thrives and African and Chinese cultures come together in a blend so beautiful and amazing that it should be written about in history books.

Let’s not forget about Ben…I will also tell you about Ben.Welcome to Yiwu City in Zhejiang (pronounced Jejiang) Province in the Eastern Coast of China. Yiwu city has grown over the years to become a darling of small-scale traders around the world, subsequently earning the title of the ‘small commodities capital of the world’.

Founded in 2011, it has transformed from an agricultural town to a global trade hub in just five years. The reason I am calling Yiwu ‘Little Africa’ is because there are so many Africans, running into the tens of thousands, living in that area. They come in various shapes, sizes and shades; plying their trade in the city with some having lived here for more than 10 years.

The fact that there are more than 6,000 students attending colleges in the city also plays a huge role. You will easily be forgiven for thinking that you’re back home! Even the restaurants and entertainment joints are characteristic of those in Africa! It is also here that I met Ben….

While covering the China-Africa Think Tanks Forum last week, we also toured Yiwu Inland Port where more than 400,000 parcels are sent from China to various parts of the world daily.

As we walked around the various stations, I spotted a black young man, perched atop a pile of wrapped cargo, two phones in hand: speaking animatedly into one, while scrolling through the other.

At that very moment, my deepest of hearts told me the man was from my motherland…and it was not wrong! It was so good to speak Kiswahili and sheng again! Oh, the things that make you happy when you are away from home!

Meet Ben Kamotho, a 30-year-old businessman who hails from Embu and has been doing business in Yiwu for five years. His is a story of the sheer determination to survive and make a life for himself and his family.

Some eight years ago, Ben’s sister Jackie accompanied a fellow trader who was buying goods in Yiwu and ended up falling in love with the city and shifting her base to China, especially after finding a large number of fellow Africans living and working there.

Three years later, in 2011, Ben would join his sister in doing business in the growing Chinese city and the rest as they say, is history. Ben works at an import/export business that offers clearing services, sourcing of goods and linking Kenyan and Chinese business persons among a host of other services.

The father of one and whose family he visits back home regularly, says he has never regretted his decision to relocate to Yiwu as business has been booming (ok, he was a bit more modest, saying business is not doing ‘too bad’) and continues to grow in spite of a few challenges here and there.

Ben is just one among many Kenyans doing business in Yiwu as the city continues to gain global attention, stealing a bit of thunder from Guangzhou, which has been the darling of many traders for years. So many are they in fact, that they have their own association.

Another unforgettable thing about Yiwu city is that it epitomises the statement ‘Shop till you drop’! The city is home to the largest small commodities market in the world, the Import Commodities Mall, which contains 75,000 shops.

It is said that if you were to spend three minutes at every shop for eight hours a day, it would take a whopping one year and a half to cover the entire market!

The Mall is also like a shopping United Nations. There are shops and traders from all over the world with an entire section set aside for African shops including Kenya. Things are so cheap you could weep! And for whatever is not cheap, haggling is allowed, as long as you can get some Chinese words in of course!

So if you’re a business man or woman who is seeking new territory to expand and grow beyond the horizons back home, then Yiwu City just might be the place for you. To the Kenyans and other fellow citizens of China’s Little Africa, keep doing what you have to do to safeguard your livelihoods and those of the ones you love. The decision to live so far away from home is not an easy one and for that reason, I salute you. Cheers to the African Hustle!