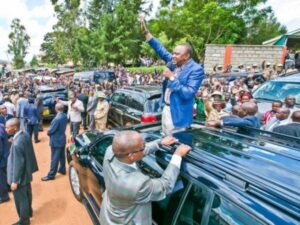 President Uhuru Kenyatta has launched a strategy to eat into the opposition’s strongholds by showering them with goodies, aiming to win by 70 per cent next year. Key are presidential visits, intense courtship of local leaders and opinion shapers, completion of promised projects, with pledges of more development and political influence to come.

“ The Jubilee government will serve all areas of the country equally, regardless of political affiliation,” Uhuru said in Nyamira town yesterday. “ Our hope is to unite all Kenyans into one peaceful society.” He officially commissioned Nyamira County Referral Hospital, saying it marks the start of better and more accessible services. The first phase of the big strategy was naming a team to set up campaign structures, including a secretariat and a political party.

That team is led by President Uhuru’s personal aide Jomo Gechaga. The second phase is being rolled out. It involves reaching out to Cord areas, offering political and development benefits and winning over county leaders. Jubilee strategists expect to get 20- 30 per cent of the vote where they performed dismally in 2013. In the next couple of months, the President will visit counties in South Nyanza and Lower Eastern perceived to support Cord.

Uhuru won with 50.05 per cent of the votes in 2013, but believes he can win more by focusing on opposition bastions. The big-picture is to show the government is working to develop each and every part of the country, including opposition strongholds.

Uhuru will dish out development projects, as he has done at the Coast and in Western Kenya. Deputy President William Ruto will concentrate on Jubilee strongholds, reassuring them of the government’s commitment and mobilising their supporters to register as voters.

The President has made a concerted effort to reach out to the Cord areas to enable him get at most 30 per cent of their votes. Uhuru and Ruto believe if they show opposition strongholds they have delivered, they will get votes.

They will showcase projects the government has started and launch completed ones. New projects will not be initiated until earlier promises are fulfilled. Cord’s consistent message is that the Jubilee government has not delivered on its campaign promises and its 2017 development pledges cannot be believed.

The plan also involves identifying point men in opposition areas who can be used by the Jubilee Coalition to mobilise support. On Tuesday Uhuru and Ruto hosted 10,000 Ukambani leaders at State House, Nairobi.

Uhuru got an average 10 percent from the three counties of Makueni, Machakos and Kitui. The meeting covered development in Lower Eastern region. Ukambani leaders headed by Machakos Governor Alfred Mutua said they would work with the administration. It was announced the Jubilee

government had invested more than Sh144 billion in water, health and road projects in Lower Eastern.

Yesterday, Uhuru and Ruto flew to Nyamira county to launch development projects, including roads and a hospital. Today, they are expected in Kisii county on a similar mission. Next Tuesday the President is tentatively scheduled to visit Kakamega. The Ukambani meeting in Nairobi laid out the basic Jubilee strategy to erode opposition support. Cabinet Secretaries outlined projects implemented in the region.

On roads, Infrastructure CS James Macharia said his ministry has completed procurement for dualling of the Machakos-Athi River turn-off road in Machakos. It will cost Sh8 billion. Water and Irrigation CS Eugene Wamalwa disclosed the government has invested Sh122 billion in water and dam projects in Lower Eastern. On health, CS Cleopa Mailu said the government’s Medical Equipment Scheme is on course.

“Ukambani region is ready to be in government. We are tired of being in opposition and we will support Jubilee in 2017. We are ready to do everything to benefi t our people,” Mbooni MP Kisoi Munyao said.

Uhuru announced he would visit the three Ukambani counties on May 19-21 to inspect promised water, land and health projects and present a university charter to Machakos. Before the visit, the government will issue 74,564 title deeds in Machakos, 33,247 in Makueni and 40,735 in Kitui, on May 2-4. “I will return to all three Ukambani counties in the second week of June to launch road and energy projects,” Uhuru said.

In 2013, Uhuru only managed 14 percent of the votes in Kitui, he garnered nine per cent in Machakos and five per cent in Makueni. In Western and Nyanza, Uhuru also aims to bolster support, which was less than 15 per cent in all counties, other than Kisii and Nyamira.

Addressing residents of Nyamira Town yesterday, Uhuru promised Jubilee will focus on “development politics and not politics to divide the country”. Uhuru launched upgrading the Mosobeti- Kebirigo Road to bring it up to bitumen standard and commissioned the Ekerubo Gieta Technical Training Institute. Today in Kisii, Uhuru will launch three roads, commission the Level 5 Hospital and relaunch the NYS Cohorts Programme. Earlier this year, Ruto caused a stir

when he hosted leaders from Kisii and Nyamira in his Sugoi home and urged them to join Jubilee.

Just last month, Ruto again visited the region, urged residents to join Jubilee and promised tangible benefits and development. “We want to discourage politics based on regions, as they are the cause of tribalism,” Ruto said.