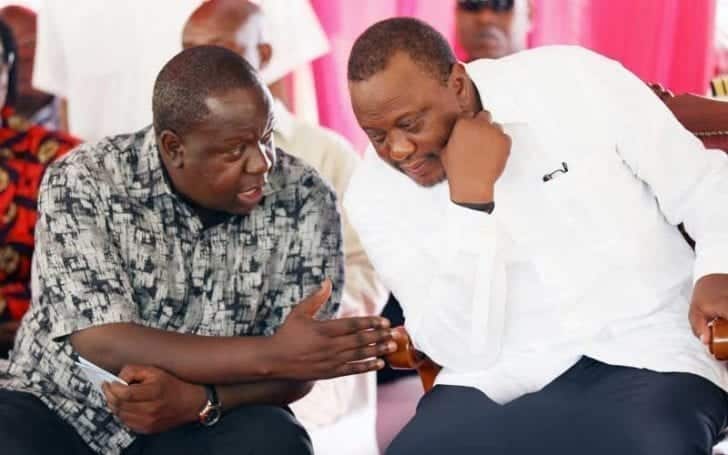 The absence of Deputy President William Ruto at State House, Mombasa on Thursday has further raised speculation over his isolation in Jubilee.

Impeccable sources indicated that Ruto was at the Coast but missed the meeting between President Uhuru Kenyatta and 24 governors.The DP reportedly flew from Nairobi’s Wilson Airport and was in Mombasa by 10am, the time the President was meeting the governors, for talks that dwelt on popularisation of the Building Bridges Initiative (BBI).Interestingly, Ruto was back in Nairobi in the afternoon where he met a group of leaders. “He was around as the governors arrived for the meeting at State House at around 10am,” said a senior official within the Presidency who witnessed the happenings.

The governors at first converged at White Sands Hotel from where they boarded buses to State House for lunch.Murang’a Governor Mwangi wa Iria termed the meeting as part of the festive season meant “to engage with the president.”When asked if Ruto attended the meeting, Kilifi Governor Amason Kingi was non-committal saying: “I really don’t know if he was around neither do I know if he was snubbed.”

Emmanuel Tallam, the deputy communications director in the DP’s office confirmed that Ruto was in Nairobi on Thursday afternoon. “The DP had informal meetings in the afternoon with leaders from Kisii and Nyamira MPs and grass root leaders’ the whole afternoon,” Tallam said.

Some senior security officers said they were not aware of any instructions to bar Ruto from accessing the President. “The DP may be having issues with Interior Ministry but no instructions have been issued to police officers,” explained a source who requested not to be named owing to the sensitivity of the matter. On Thursday, some Ruto allies took to social media and said that things were getting increasingly hot for their man.“Team William Ruto fasten your seat belts.

We are approaching heavy turbulence for a short while, then it will be calm and we land at our destination. Say a prayer for William Ruto PhD. We know the enemy and the direction he is coming from.

If God is for us who can be against us?” Soy MP Caleb Kositany tweeted.Kositany, who alongside Elgeyo/Marakwet Senator Kipchumba Murkomen are the Rift Valley Parliamentary caucus leaders have been vocal about their displeasure with the way some government officials have been treating the DP.Yesterday Murkomen tweeted: “This is the moment. This is the time. Let’s live it. Let’s record it. History will be kind!”

A week ago, Ruto was locked out of his official residence in Mombasa, which is just metres away from State House. This came days after he was denied clearance to fly straight to Mombasa from Botswana to meet the President.The Head of State is said to have personally reached out to 24 governors who are pro-BBI which has kicked off a storm between the DP’s allies and the pro-Handshake team spearheaded by the President and opposition leader Raila Odinga.

It was quite telling when the President announced a reshuffle of the Cabinet in the absence of Ruto, a departure from the past.Interestingly, governors allied to the DP were not at the Mombasa meeting. Nandi Governor Stephen Sang’ and his Uasin Gishu counterpart Jackson Mandago were at a function in Nairobi and said they were not aware of the Mombasa State House meeting.Insiders privy to the development told the Saturday Standard that Kenyatta was categorical that the governors must champion the BBI report by mobilising elected and grassroots’ leaders in their counties.

All of us will be in Kakamega County to drum up support for the BBI report,” said a county chief from Mt Kenya.“We had all governors from Nyanza, Western, parts of Rift Valley, Coast, North Eastern and Eastern regions. In total, they were 24 governors,” disclosed a source aware of the meeting.He added: “We discussed the BBI popularisation tours.

The President told us to organise the meetings in our counties and engage the Members of the County Assemblies and locals.”Another governor from Nyanza said the President offered to join them for lunch. Interior and Cabinet Secretary Dr Fred Matiang’i joined them too.

The DP reportedly shared his frustration with his confidants and questioned his crime to warrant the hostility.During the Nakuru meeting where Ruto allies were humiliated, the Saturday Standard reliably learnt that Lands Cabinet Secretary Farida Karoney was involved in the planned issuance of title deeds in Nakuru Town East constituency and was only informed of the presidential event on Tuesday morning.

The CS did not attend the event.Nandi Senator Samson Cheragei told Saturday Standard on phone that when the time is right, they will hold a meeting and give the way forward. Ruto allies have blamed the Handshake between Uhuru and Raila for the frosty relations between the President and his deputy.

The DP believes that the BBI /Handshake has been hijacked to craft ODM’s 2022 political line up.“Unity/inclusivity pretense and associated squander of public resources should stop. The opposition (NASA) is already dismembered/dead; now dividing Jubilee. Big4 roll out only way to go,” Ruto tweeted six days ago.