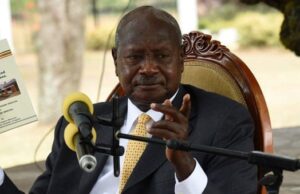 Those who flout the new regulations could be fined Ush10 million (ksh400,000) or serve up to ten years in prison.

In extreme cases, the offenders would have to pay the fine and serve a 10–year prison term.

The misunderstanding over the Act is what has prompted the Cabinet to pass the new anti–pornography regulations.

“Cabinet scrutinised the provisions of the Anti–pornography Act, 2014 with the view of addressing its ambiguity to ease its applicability in Uganda,” Mr Muhwezi said.

“After scrutiny, cabinet has approved the anti–pornography regulations, 2015, which we believe will now ease the implementation of the Anti–pornography Act, 2014. The guidelines prohibit broadcasting of sexually explicit material in the form of still pictures, video footage and vulgar presenter utterances on our media airwaves.”

The Cabinet has directed the Ethics ministry to issue a statutory instrument to gazette the regulations “so that enforcement can commence immediately”.

The new regulations come on the heels of the formation of a Pornography Control Committee, which will, among other roles, seek pornographic material before it is broadcasted and to destroy such offensive matter.

At the beginning of this month, Ethics minister Simon Lokodo said the government would next fiscal year spend Shs2.6 billion on pornography detecting software.

The software would be installed on electronic gadgets such as mobile phones and even computers, which would automatically send an alert to the control room – giving the details about the kind of gadget being used for pornography.

All this, Mr Lokodo said, is meant to ease the enforcement of the anti-pornography act.