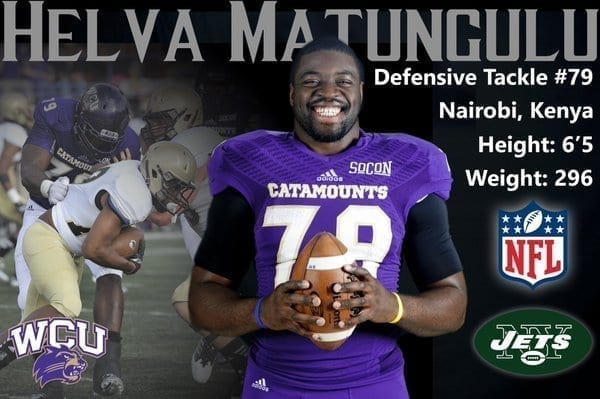 Kenyan native Helva Matungulu who was only introduced to American football five years ago, has been signed by the New York Jets.

A graduate of Western Carolina University, Matungulu stumbled into football during his first few days at the school while looking for directions. He was a molecular biology student at the school and had never seen football in his life let alone played it when he happened across a practice on campus.

The coaches took one look at the 6’5″, 296 lb science student and it wasn’t long before he was learning the rudiments of the game.

Matungulu was born and raised in Nairobi, Kenya attending high school there. He played rugby and won the Kenyan Rugby 7s national championship before heading off to college in the US.

The huge defensive tackle began his football career at WCU along the offensive line in 2011 and 2012 before converting to defense prior to the 2013 season. All told, Matungulu appeared in 31 career games at defensive tackle during his  career at Western Carolina, posting 53 career stops including 19 solo tackles and seven for losses.

Matungulu joins fellow Kenyan Daniel Adongo in the NFL. Adongo is a member of the Indianapolis Colts.

After Mothers Day: We Orphans without Mothers!

Why Ruto is courting Museveni and Kikwete