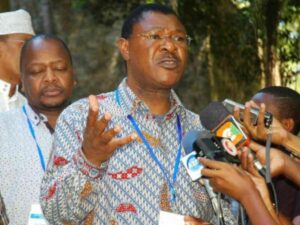 Police have asked Moses Wetang’ula to submit any information he may have on the murder of businessman Jacob Juma.

A statement on Wednesday noted media reports that the Bungoma Senator had the names of the killers and intended to reveal them at his funeral on Saturday.

Spokesman George Kinoti further noted that speculation on the murder has been rife, with some politicians making “clearly unfounded accusations” against some police units.

“We expect Wetang’ula… to discern credible facts from ordinary hearsay… [He] should therefore inform police as soon as possible for appropriate action,” said Kinoti.

He noted that the Senator is a long-standing lawyer with distinguished service in various high-ranking government positions.

Kinoti said investigations into Juma’s murder are ongoing and appealed to the public for any helpful information.

“A team of experienced detectives have been assigned to the case to follow it diligently with a view to arresting and having those involved in the murder charged before a court of law,” he said.

Wetang’ula, who is also Senate Minority leader, said Juma had expressed fears of a plot for his assassination.

“Juma called me three weeks ago and in our meeting, he revealed to me that his life was in danger because there were people he knew well who were planning to kill him,” he said in Uasin Gishu.

“He gave me names of those he claimed were behind the plot, which I will make public during his burial.”

Juma was shot seven times in the head and three times in the chest as he joined the Southern by-pass on his way home to Karen.

The 42-year-old, who had been vocal on political issues, severely bashed the government.

A requiem mass will be held All Saints Cathedral at 10am on Thursday before Juma’s body is taken to Uhuru Park for public viewing.

Wetang’ula and his Cord co-principals Raila Odinga and Kalonzo Musyoka will attend the viewing. Raila has accused the Jubilee government of being behind Juma’s murder.

The bad, the ugly, the very evil: 10 things we wish didn’t happen in Africa…