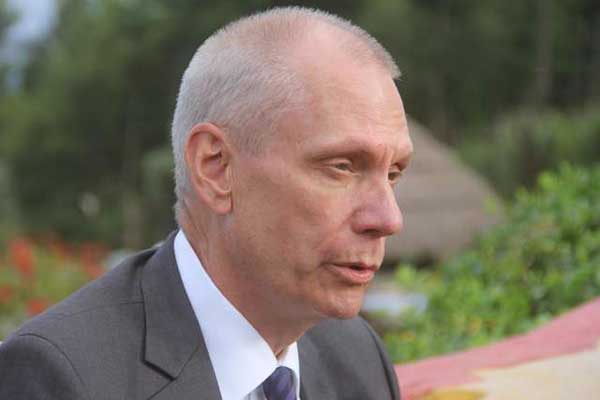 Eleven foreign diplomats on Wednesday criticised calls by the opposition to occupy electoral commission offices countrywide and force its top officials to resign.

The diplomats, led by US ambassador Robert Godec, at the same time called on Kenyans and political leaders to help in ensuring that electoral and judicial institutions are strong, effective and enjoy public confidence.

Decisions touching on the future of the electoral commission’s leadership must be broadly acceptable and achieved through dialogue and in line with the Constitution, the diplomats said.

“Organising free, fair, and peaceful elections is a ‘whole of society’ effort. Voters must have confidence that institutions such as the IEBC and the judiciary are impartial, efficient, and operate in accordance with the law,” noted the diplomats, who included Nic Hailey (UK), Jutta Frasch (Germany), David Angell (Canada), Ralf Heckner (Switzerland) and Johan Borgstam (Sweden).

“Kenya’s politicians and citizens have a responsibility to build trust in the democratic system and to find ways to ensure the electoral and judicial institutions are strong and effective.

“The IEBC and judiciary must have the resources they need to carry out their responsibilities. Everyone must reject rhetoric or actions that incite violence,” they added.

The statement comes in the wake of calls by the Coalition for Reforms and Democracy (Cord) to its supporters to stage protests at all Independent Electoral and Boundaries Commission (IEBC) offices countrywide starting next week to force the commissioners to resign.

VIDEO: Drama as Mariga is Barred From Kibra By-election

The initial protest at the IEBC headquarters at Anniversary Towers last week was violently dispersed by the police.

Cord, led by its three principals Raila Odinga, Kalonzo Musyoka and Moses Wetang’ula, maintains that the electoral body is tainted and lacks the credibility to conduct a free and fair election next year.

Both President Kenyatta and Deputy President William Ruto have condemned the calls and asked Cord leaders to follow the laid-down procedures of removing IEBC commissioners.

Mr Odinga at the weekend alleged that the current IEBC was planning to rig the 2017 election in favour of the rival Jubilee coalition.

In the statement, the diplomats called on Kenyans to explore what steps to take to ensure these elections are free, fair and peaceful.

They disclosed that they had already held talks with a broad spectrum of politicians, religious, civil society and business leaders and with representatives of the electoral body to discuss the next election.

“In all of our meetings, we have reiterated the crucial importance of public confidence in the electoral system. We have noted the steps the IEBC and other institutions have taken to prepare for the elections and emphasised the actions we believe are necessary to hold a successful poll,” they said.

The diplomats said all Kenyans must be given access to national identity cards.

They called on all leaders and citizens to come together through dialogue to build confidence in the electoral system.

“While the responsibility for doing so rests first with elected and appointed officials, this is a challenge for all Kenyans and everyone should join in good faith,” they stated.

They challenged politicians to ensure that there is no repeat of election-related violence witnessed in the past.