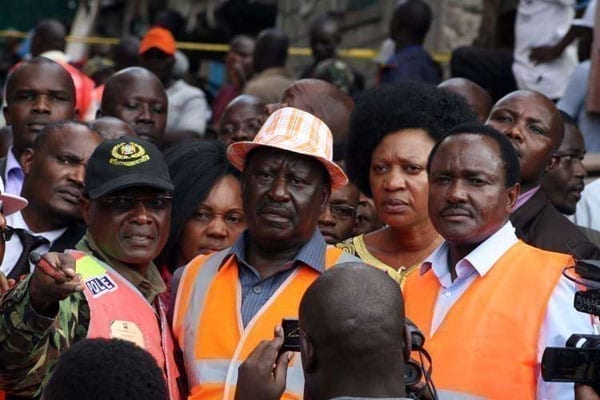 They accused ODM leader Raila Odinga of showing disrespect to Wiper leaders by treating them like flower girls rather than as equal partners in the coalition.

Mr Kisio Munyao (Mbooni), Joe Mutambo (Mwingi Central) and Richard Makenga (Kaiti), accused Mr Odinga of reneging on a pledge to back Wiper leader Kalonzo Musyoka for president in next year’s General Election in a Memorandum of Understanding agreed on by the two just before the 2013 polls.

Mr Odinga was quoted on Monday saying the agreement was no longer valid since Cord did not form the Government.

“The Kamba feel severely short-changed by Raila because we have been persistent that he honours the MoU between himself and Kalonzo Musyoka. Clearly now the die is cast. We want to tell him we are not political toddlers. We have our people and capacity. We are not flower girls. He should forget our support in 2017,” said Mr Munyao.

The leaders, who spoke at a press briefing at Parliament Buildings, heaped praise on President Uhuru Kenyatta for promising to roll out development projects worth billions of shillings in Ukambani during a recent at State House meeting with him attended by 11 MPs from the region.

The State House meeting was intended to chip away at Cord support in Ukambani, which has traditionally been an opposition zone.

Machakos governor Alfred Mutua is shaping up as one of Mr Musyoka’s most vocal critics and he seems to be close to the Jubilee leadership.

Tuesday, Mr Mutambo hit out at critics who termed the State House delegation a betrayal of the Akamba people, saying they were only interested in development in the region and that President Kenyatta and Deputy President William Ruto were capable of delivering it.

“If auctioning the Kamba means development and peace for the region, then President Kenyatta is the highest bidder and anyone who has an offer let him come out and we will take it,” he said, adding that those complaining had in the past auctioned votes from the region and should declare what they had received in return instead of criticising the State House group.

If Wiper withdraws from Cord, although no such decision has been taken by the party, it could complicate the opposition’s effort to clinch power next year and Mr Odinga’s ambition to assume the Presidency in what some consider to be his last chance on account of his age. Mr Odinga is 72.

Wiper Secretary General Hassan Omar said any agreement reached by the coalition on its presidential flag bearer must not only respect the letter of the MoU, but also its spirit, which is to allow the principals an equal chance to run for president.

“Wiper still believes that Mr Musyoka would be the best person to vie against Mr Kenyatta,” said Mr Omar, the Mombasa Senator on Tuesday.

“We need to agree on a presidential candidate as soon as possible,” he said, adding that arriving at a mutual decision on who to field by close of the year would enable Cord to fight off any chances of a political fallout, as well as give the coalition enough time to popularise its candidate.

The coalition’s unity has also been shaken by another partner, Ford Kenya, whose flag bearer Bungoma Senator Moses Wetang’ula’ is seeking the support of the other two co-principals for the Presidency.

Mr Odinga skipped the launch of Mr Wetangula’s presidential bid in Kakamega, which was marked by violence, as he was said to be in Tanzania.

Tuesday, the Wiper MPs were reacting to remarks by Mr Odinga that he would not honour the MoU signed with Mr Musyoka in 2013 and that he expected to be Cord’s presidential flag bearer.

Asked why they reacted angrily to Mr Odinga’s statement and yet the three principals were yet to sit down and agree on who would run, the MPs claimed Mr Odinga’s word in Cord was final.