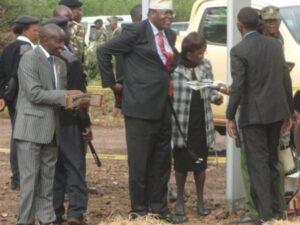 Raila’s seat remained vacant during the session of the final rites for the former First Lady.

It was reserved at the VIP section of the main dais, an indication that he was expected at the ceremony to mourn with former President Mwai Kibaki’s family.

The two ran a coalition government between 2008 and 2013 in the aftermath of a heavily contested election.

Unlike Wednesday when the Opposition boss attended the requiem mass at Consolata Shrine church, Westlands, majority of his supporters did not turn up for the funeral.

Wetangula and Kalonzo instead attended a burial ceremony of the late Charles Mutui, a former councilor and Wiper activist in Mivukoni, Mwingi North constituency, Kitui County.

Orange Democratic Movement (ODM) deputy party leader Wycliffe Oparanya, who is also Kakamega governor, was in attendance though was not given a chance to address the mourners.

Retired President Daniel Moi also missed the burial ceremony though word had gone round that he would attend.

Miguna was ordered to remove his belt and other personal belongings from his pocket for screening at the entrance.

He initially hesitated and the security personnel had to move him aside to pave way for those who were willing to be searched.

Though he finally bowed to the orders, Miguna was not happy with the way he was treated having put on his best suit, spectacles and a Muslim cap.

A disappointed Miguna was overheard complaining to journalists that the security had not recognized him because he is a common citizen.

Kenyans with secondary education are functionally illiterate in English

Video:Raila and CORD Reaction after Wetangula lost his seat