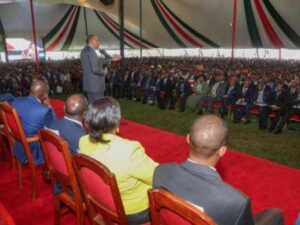 President Uhuru Kenyatta’s visit to Machakos, Makueni and Kitui counties have been postponed from May 19, 20 and 21 to June.

State House Spokesperson Manoah Esipisu did not give a reason but said the new dates will be announced once specified.

”Uhuru is looking forward to the visits to interact with leaders and residents and exchange views on the region’s development needs,” said Esipisu.

He said in a statement on Saturday that the extra time should allow the completion of plans for the visit.

The tour which has caused anxiety, was planned after Uhuru hosted 10,000 leaders and professionals from Ukambani at State House in Nairobi.

Wiper leader Kalonzo Musyoka said he will be among the leaders who will welcome the President to the region.

Machakos Governor Alfred Mutua urged Ukambani leaders to stop extorting Uhuru ahead of his tour. He said some demanded millions of shillings to abandon their political parties and join the Jubilee brigade.

“Let’s join hands and be agents of political change. We must change the lives of our people by practising politics of development,” he said.

Kibwezi-Mutomo-Kitui road, which Kalonzo said is long overdue, is among projects the President is expected to commission.

Uhuru is also expected to inspect water, land and health projects, and give a charter to Machakos University College.