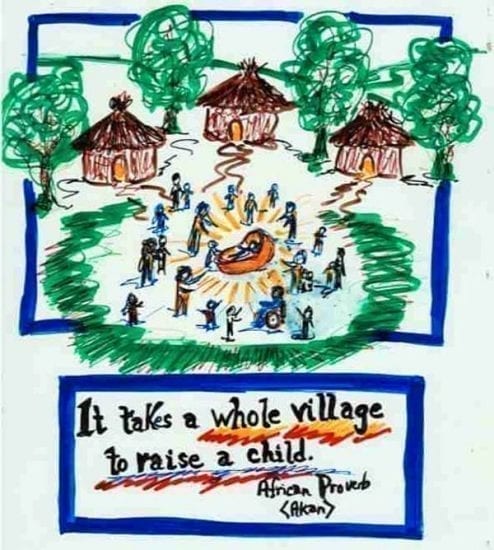 “There is nothing so wrong with America that cannot be fixed by what is right with America.” Those were the words of former president Bill Clinton when he made a passionate case for his wife to be 45th POTUS.

After watching both the republican and the democratic conventions. As an American of Kenyan origin with two Kenyan American boys who are dark skin, there is no doubt in my mind that as I plan for the future of my boys and that of their children. When my time is up on this planet and it’s time to pass the button to the next generation. I believe as a country we are safer and better of journeying the next 4 years under a democratic leader Hillary R Clinton.

The republican convention clearly struggled to communicate their agenda to the American human being. They even struggled to fill their speaker slots for the 3 day convention. As evidenced by their choice of speakers. Like the Muslim leader who could not even mention Allah or highlight the American Muslims plight. As evidenced in the absence of African American presence in the audience but for a few speakers who didn’t resonate with the general atmosphere of the African American. They only passionately spoke of how Donald Trump is the guy to build the African American future FOR us and not with us. There is something un american in that idea. To sum it up, Mr Trump spoke for over an hour only to tell Americans that only he can solve our problems. He spoke of what is wrong with America and Americans for that matter inspite of his continued growth in wealth, though inflated to fit his ego. His delusion is only the Trump organization can fix America.

My take is the Republican Party has been out of touch with what’s going on in the real America and that is the reason why Trump was able to bully through the primaries and become the republican flag bearer. He doesn’t represent any conservative values. The party was against him and no true conservative has embraced his candidacy. He has continually preached politics that divide  rather than unite.

There is a big difference between running a multi billion company and leading a superpower. One is fueled by profits at whatever cost, and the other is fueled by the welfare of the least amongst us.

VIDEO: Life In The Village Where I Grew Up By Bob Mwiti

From going to school barefoot in a Village to flying and…

On the other hand the democratic convention was very personal. It was adorned with people from all walks of life with stories of triumph, and where we can right the past wrongs. From the First Lady with her personal story of raising African American kids in a White House built by slaves. To Gabby Giffords powerful vouch for Hillary Clinton after surviving gun violence. To mothers whose sons were victims of police brutality coming together not just for justice but for a better America for all. To the transgender, I don’t know if it’s him or her. But the democratic convention was representative of America. The speakers spoke of what we can achieve together and not what an individual can do for us. America is much bigger than the biggest ego amongst us.

As an immigrant it was very personal to see new citizens pledge their allegiance to the USA. A recognition that America is a nation of immigrants and a nation of laws.

Hillary Clinton summed up the convention with a presidential speech with a personal touch.
She reminded us of what has made America great and if we summon the power of all and not just the powerful few, then the 21st century will be an American century.

Some might want to argue that the liberals are ruining the moral fabric of our country but I beg to give a different perspective. Our religious leaders need to wake up and take charge. Laws follow what the majority demand. What the adults are demanding today has been condoned in churches, homes and communities before the adults became of age.

Even on a moral level, Trump does not represent conservative values and he is too much of a hot head to be a spokesperson. He will only speak for the Trump organization.

As Hillary acknowledged back in 1996 that it takes a village to raise a child. Those words are very true 20 years later. She knows that it’s through collective effort that we become great. It’s through building each other and not bullying each other that we heal the world. And it’s not through maximizing profits by exploiting the least amongst  us that we grow an economy.

That’s my opinion, but my request is you get out and vote not as a block but vote for your values. Vote for your choice.