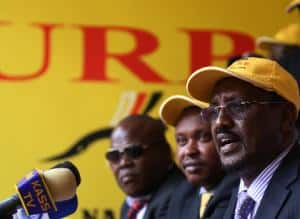 Deputy President William Ruto’s URP think tanks are plotting to prevent Kanu from signing a pre- or post-election pact with the Jubilee Party.

According to URP insiders aware of the stratagem, “Either Kanu dissolves and joins the yet-to-be-launched JP party or it will be locked out completely” from entering any coalition with the party for President Uhuru Kenyatta’s and Ruto’s reelection bid.

Kanu has already announced it will not be dissolved but instead will work with jubilee.

Ruto’s allies are apprehensive that the independence party led by the DP’s political rival Baringo Senator Gideon Moi could benefit from the fierce competition for Jubilee tickets. Disgruntled losers in nominations might jump ship to Kanu, thus weakening Ruto’s grip on the Rift Valley.

If Kanu is allowed to join JP, according to analysts, defectors to the party would ride on the agreement to dislodge JP-sponsored candidates across the expansive, vote-rich region.

Ruto’s strategists fear that with the merger of all Jubilee affiliate parties, which will result in joint nominations next year, Kanu is likely to have quite a few MCAs, governors, MPs and senators “who will feel shortchanged during the nomination process and can easily cross over to Kanu”.

But Gideon has urged URP to stop acting on assumptions that Kanu wants to join Jubilee.

Addressing hundreds of supporters in Eldama Ravine on Thursday, Gideon said Jubilee should fulfill its campaign pledges before asking other parties to fold up and merge with it.

“We in Kanu will only agree to have a merger with parties that are ready to work for the people now because people need their rights now and not tomorrow,” he said.

He was speaking at the opening of a Sh200million milk processing plant.

However, many of Ruto’s lieutenants do not feel threatened by the independence party that ruled for 24 years. They say it will be an uphill task for Kanu to make a comeback.

“We left Kanu many years ago and we are not going back. The Kalenjins are now behind Ruto and the community will follow the political direction he will give us,” Melly told the Star in an interview.

“Kanu exited the stage in 2002 and it has no chances of getting more than five seats in any election. We have moved on into progressive parties with fresh ideas that will develop Kenya,” Sang said.

Laboso, who wants to topple Bomet Governor Isaac Rutto, said, “Rift Valley is intact and will vote as a block for Jubilee candidates.”

“Yes, there are fears among many aspirants over how the nomination process

will be carried out. It is normal to feel so but now that Kanu has warmed up to the opposition Cord, it will be difficult to get any seat,” Laboso said.

In setting the stage for the 2017 election battle, Kanu is now identifying popular candidates to run for various seats.

According to the strategic plan seen by the Star, the party is eying a clean sweep of members of Parliament, governors and MCAs in Baringo and West Pokot counties. It aims for at least half the seats in the counties o Bomet, Nakuru, Kericho, Elgeyo Marakwet, Trans Nzoia, Nandi and Uasin Gishu.

In West Pokot, Kanu is targeting another clean sweep of all the positions of the governor, senator, four members of National Assembly and a majority of county assembly seats. In the last elections, Kanu managed to win the Senate seat, governor’s office and Kapenguria parliamentary seat. But last week they all crossed over to Jubilee.

In Kericho county, Kanu wants to retain the Belgut constituency and get two extra seats in Kipkelion West and Ainamoi. In Nakuru, the party is eying the position of senator and four parliamentary seats in Rongai, Kuresoi South, Kuresoi North and Nakuru Town West.

In Nandi, Uasin Gishu and Elgeyo Marakwet, Kanu is strategising to get three parliamentary seats each.

In March, Gideon Moi who is also the chairman of the party, revealed that as many as 50 Jubilee legislators quietly backed Kanu’s Paul Sang during the Kericho county senate by-election. But the Jubilee Alliance Party candidate Aaron Cheruyiot worn by landslide.

Yesterday Salat said Jubilee is the majority party in the Senate, courtesy of the Amani coalition that brings together Kanu and UDF.

“Gideon has supported Uhuru for all this time and he will still do so next year. He knows that when the time comes, Uhuru will return the favour and support him,” he said.

Last week Senator Moi said he will declare his presidential bid after the 2017 election.

He said he made strong coalition agreements with

Jubilee in 2013 and he will not violate them.

“We wish well those who are ready to dissolve their parties to form a larger political outfit. As for us, we will not be walking in that direction. Those who think leadership is about pushing others to follow their ways are very wrong. That is the leadership of the past,” he said at fundraiser in Baringo county.