VIDEO: How Koffi Olomide Was Arrested Outside Citizen TV Studios 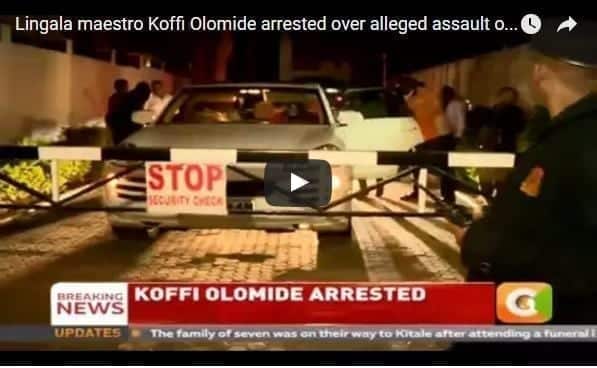 Congolese rhumba maestro, Koffi Olomide was on Friday night arrested outside Citizen TV studios after a video of him kicking one of his female dancers went viral.

Inspector General of Police Joseph Boinnet ordered his arrest after public outrage with some Kenyans calling for his deportation to Congo.

In a video captured by Citizen TV, police appeared to be waiting for Olomide outside the studios where they surrounded his car.

It is reported that he was escorted to the Jomo Kenyatta International Airport (JKIA) police station as investigations into the assault continue.

Olomide denied kicking the female dancer and claimed that he was defending his crew from a pick-pocket at the airport.

Koffi Olomide Secretly Released from Jail a Day After 18…

He, however, apologised and maintained that he respected all women in an earlier television interview.

It is not yet clear whether the anticipated Bomas concert scheduled for Saturday will proceed, now that the musician spent the night in the cells and not the luxurious Kempinski Hotel as it were.