PHOTOS:Another Beautiful Skyscraper Set To Be Built in Upper Hill 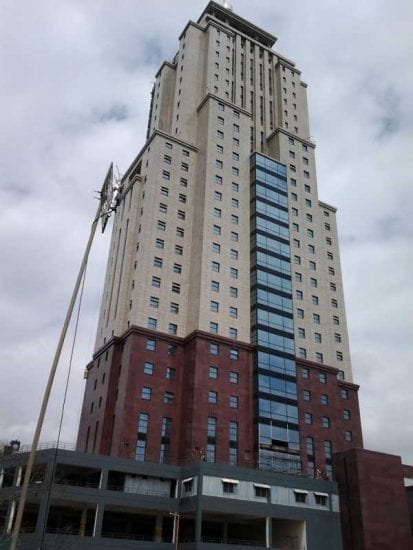 Nairobi is turning out to the skyscraper hub of Africa.

Just weeks after UAP-Old Mutual tower became the tallest building in the region, plans have been announced for the construction of another skyscraper.

You may have seen some black billboards around the city with the date 04.08.2016. That was the ground breaking date for the new project dubbed Montave.

Montave Towers will be set on 3.54 acres at the junction of Lower Hill Road and Haile Selassie Avenue.

It will add up to over 1 million square feet of opulent mixed-use space, consisting of residential, commercial and office space.

At only 40 floors (160 metres), Montave towers will not be breaking any records, but the two skyscrapers will be some of the most beautiful pieces of architectural work in Nairobi. The Southern Tower will rise 40 floors, while the Northern Tower will be 25 floors. Work spaces will have a 360 degree panorama of the city surrounds. There will be a rooftop helipad on the Northern Tower.

Between the two towers will be a terraced series of intricately designed residences rises to 22 floors, offering 1, 2 and 3-bed apartments featuring open-plan layouts and balconies with panoramic views. At the upper levels will be 3 and 4 bed penthouses overlooking an infinity pool.

For those not working or living at Montage, there will be a shopping mall, hotel and an entertainment floor with restaurants, lounges, game rooms etc.

The project will reportedly cost Sh12 billion, and 2018 is the expected completion date.

Other skyscrapers under construction in Nairobi include: Hass Towers (to be tallest in Africa until completion of Al Noor Tower in Morocco), Britam Tower, Avic International, Prism Tower, Upper Hill Chambers and Parliament Tower.