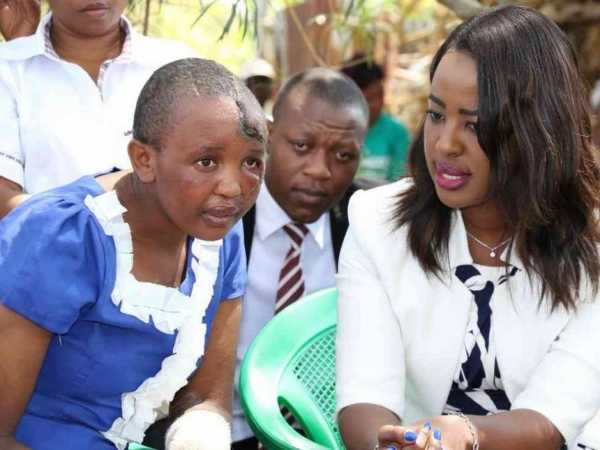 Battered woman Jackline Mwende, whose hands were chopped off, will fly to South Korea on Monday to be fitted with myoelectric prostheses.

The 27-year old will leave in the afternoon, for the operation that LG Electronics will pay for.

Mwende, a doctor from PCEA Kikuyu Hospital and LG’s management team will address the media at JKIA at before she leaves.

LG had committed to covering the woman’s surgery and medical expenses and also pay for her transport to and from hospital.

Mwende was the talk of town after she was allegedly attacked by the husband John Ngila after failing to fall pregnant.

Her hands were cut off and her head hacked with a machete about the fact that she had not fallen pregnant in seven years of marriage.

Mwende said she was surprised by the attack as doctors told the couple she was fertile while Ngila was impotent.

Sources close to her family said the two had not lived together for a year. She was living at their home while her husband had rented a bedsitter in Masii town.

The woman has received assistance from various quarters inlcuding the Machakos government and women’s rights activists.

All Kenyan public schools to receive tablets by June next year

Romour or Truth?:Exclusive apology of Ocampo to Kenyans over ICC 4

VIDEO: How To Fund Your Master’s Studies In USA Part 1

UHURU TO CONTROL PARLIAMENT AND SENATE