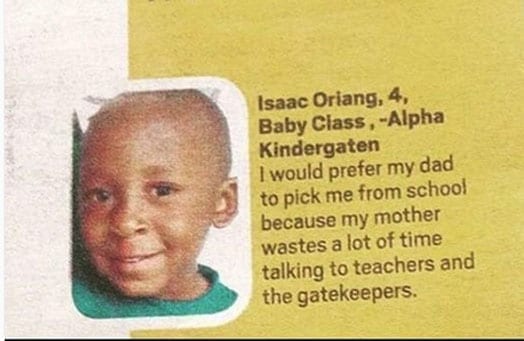 A four-year-old boy is causing a buzz on social media after giving his opinion on who he prefers between his mother and father.

In what looks like a comments section for kids in a newspaper Isaac Oriang was asked on who he prefers between his mum or dad to drop or pick him from school.

To which he responded by saying that he prefers his dad to do both the dropping and picking up from school, since the mother wastes a lot of time talking to teachers and the gatekeepers.

The picture has been shared widely on social media evoking different reactions from netizens.

Singer Wahu a mother of two girls wrote on his Instagram page saying, “This kid tho!”

And in what looked like a similar newspaper page, 6 year old Maria Goretti Ayero in P1, Kampala Parents School said she prefers her mother because she tells stories on the way and keeps time. His father spends a lot of time in the bathroom and takes them late to school.

ALSO READ  Watch Uhuru and Raila Sing ‘Don’t You Worry Child’.. With Help from Jomo and Jaramogi
0 33
Share
You might also like More from author
NEWS