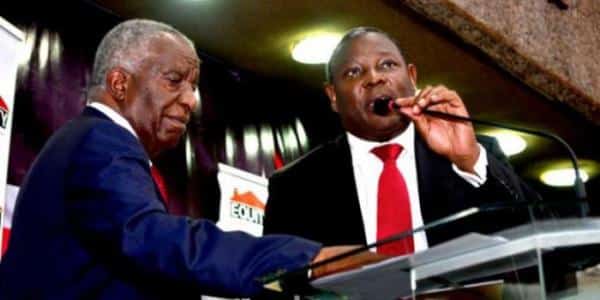 A village in Kangema, Murang’a County, could perhaps boast being the richest locality in the country considering that a good number of Kenyan billionaires hail from the area.

Interestingly, Mr Munga, Mwangi and Britam boss Wairegi have worked together as village men to amass their wealth.

The trio shares board directorship in companies such as Equity, Britam and Housing Finance.

They also own billions of shares at the Nairobi Stock Exchange in various companies across various sectors.

Kenyan Woman Rose Oginga Who Runs Successful Companies in US

According to Mr Munga, the secret to a successful business is knowing what the business is and staying focussed, then eventually everything will neatly fall into place.

In an interview with a local daily,  Mr Munga divulged that among them, there were no brokers and they conduct their businesses as gentlemen.

“No brokers (among us). We don’t undercut each other. We don’t sabotage or willingly do som­ething to hurt each other’s business or establishments. It is an unspoken rule that guides how we relate with each other in both business and personal life. That is why you never see us quarrelling in public,” the Equity Bank chairman expressed.

He was born in 1943. Munga founded Equity Building Society (EBS) in his hometown of Kangema in 1984 before it became Equity Bank in August 2014.

The 73-year-old worked as an assistant secretary at the Ministry of Water before he resigned in 1993.

Munga who is currently Equity’s chairman hired CEO Mwangi as the director of finance to bring changes to EBS that was losing Sh5 Million annually.

He was born in 1962. He is a husband and a father to four children.

At the age of 31, he was employed by the Chairman and the CEO of Equity Building Society (EBS), to wind up the insolvent organisation which was losing Sh5 Million yearly.

He went to the University of Nairobi and graduated with a Bachelor of Commerce degree (BCom).

He was born in 1953. Mr Wairegi is the current Group Managing Director and Group Chief Executive Officer of British-American Investments Company (Britam).

When he was 24 years he joined British-American as the Chief Accountant.

He holds a Bachelor of Commerce degree (BCom) and a Master of Business Administration (MBA), specializing in Accounting and Finance from the University of Nairobi. He is also a Certified Public Accountant (CPA).

Mr Mbaru is currently the chairman and chief executive at the Dyer and Blair investment bank, where he owns a majority stake.

The 69-year-old  holds a Bachelor’s degree in Commerce (BCom) from the University of Nairobi.

Mbaru served as a civil servant in various capacities before leaving for the private sector in 1980.

After this, he set up several banks – Jimba Credit Corporation Limited, Union Bank Of Kenya Limited and the Kenya Savings & Mortgages Limited, all of which were taken over by former president Daniel arap Moi’s regime as a way to regulate the banking industry.

The two co-founded Rwathia Distributors influencing Mr Munga, Mwangi and Wairegi to work together as men from the same village, Rwathia.

According to a 2014 article by Dr Bitange Ndemo titled: The Mystery of Success, he highlights that Rwathia controls almost 20% of GDP and nearly half of stock market in the country.

“This village arguably controls almost 20 per cent of Kenya’s Gross Domestic Product (GDP) and almost 40% of the stock market in Kenya.

“Their  forebearers like Gerishon Kirima and Gerald Gikonyo, one of the co-founders of Rwathia Distributors, were successful in spite of the fact that they had limited education. Rwathia’s third generation is succeeding, not just here in Kenya, but in far-flung areas like the United States, ” Ndemo noted.

The two apparently control the Rwathia groups of businesses which include prime properties in Nairobi, especially within areas on the east side of lower Tom Mboya Street, Ronald Ngara Street, River Road, among others.

He was born in 1941. Mr Kirubi is a businessman, entrepreneur, industrialist and philanthropist. He is a Director at Centum Investment Company Limited, a business conglomerate, in which he is the largest individual shareholder.