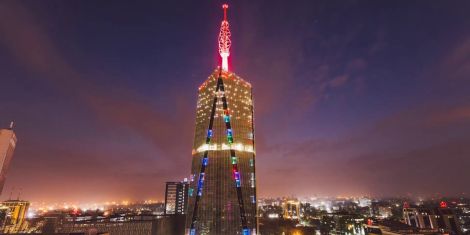 Having your tower become the only Africa Building in the 10 world’s top skyscrapers is the ultimate status boost.

Seated in his office suite at Old Britam House, Billionaire Benson Wairegi can marvel at his uninhibited view of Kenya’s tallest tower that bit all African buildings to clinch the revered world title.

The tower was, in February this year, featured in the top skyscrapers and awarded the Emporis Skyscraper Award in Germany.

Wairegi, Britam’s group managing director, however, reveals that it took more than sweet, tears and a lengthy period of time to clinch the title and shower in the tower’s pride.

“Yes, the award is a good thing and a global recognition of what we set out to do. It is a confirmation of our stand on innovation. However, I like to focus ahead on what we can do to keep this fire of innovation going,” he told The Standard.

The billionaire revealed that despite the fact that actual construction on the tower took place between 2013 and 2017, the foundation was laid 30 years ago.

In 1986, Wairegi was already mauling over the idea of relocating the headquarters of the Britam Company to Upper Hill, where the tower now stands.

At the time, the most valuable location was where the Old Britam was located, in the middle of CBD, whereas, Upper Hill only consisted of bungalows for government employees.

“It was a case of pushing boundaries by taking calculated risks. It was all about the future vision. The company has now come of age with a diverse portfolio that includes financial management services. We asked ourselves what we could now do to signify this financial strength. Thus the idea to construct the new tower was mooted,” stated Wairegi.

The tower now topples any other in the country with a water recycling system, LED lighting and a spacious atrium that invites a lot of natural light and air into the building.

He was born in 1953. Mr Wairegi is the current Group Managing Director and Group Chief Executive Officer of Britam Holdings, formerly known as British-American Investments Company.

When he was 24 years he joined British-American as the Chief Accountant.

He holds a Bachelor of Commerce degree (BCom) and a Master of Business Administration (MBA), specialising in Accounting and Finance from the University of Nairobi. He is also a Certified Public Accountant (CPA).

A sad story of a Diaspora returnee Anthony Njogu