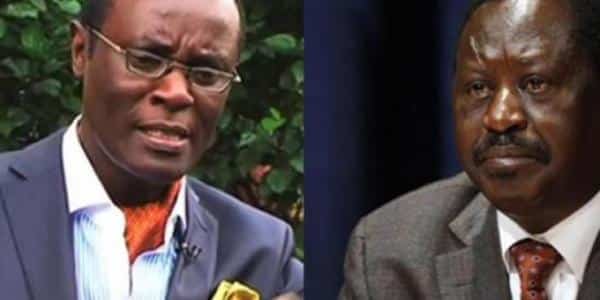 Political analyst Mutahi Ngunyi has offered a hypothetical solution to the infightings in the CORD coalition and an approach that could be employed to make Opposition leader Raila Odinga become the country’s next President.

In his latest analysis of the political affairs in the country titled: Solutions to CORD Before Collapse: Tips for JAP the Rival, Mr Ngunyi observed that CORD had been experiencing a ‘scarcity of positions’, hence, the recent disagreements between the co-principals.

According to the political scientist, to cool the apparent discord in CORD, Odinga should propose a change in the structure of the executive to create five top positions within the government without necessitating a referendum.

Mutahi opined that should Raila come up with such a proposition and forward it to the National Assembly, it would receive massive support from even the Jubilee coalition.

“To be able to change the structure of the national executive doesn’t need a referendum. You just need a two-third majority to alter a few sections of the Constitution in this moment of scarcity and there you have your change,” he advised.

Apart from the President and Deputy President seats, Mutahi added that the Opposition chief could advocate for the positions of a non-executive Prime Minister and two Deputy Prime Ministers.

He added that the former Prime Minister would be the best champion of such an idea which could even go a long way in solving the wrangles within the Opposition.

“If he can take it up and go with it, I am very sure Jubilee Party lawmakers would be more than happy to support it. It’s the kind of thing that you put into Parliament in the morning and be done by afternoon,” stated Mutahi.

He further divulged that such a process would be a sure strategy for Odinga to win in the upcoming 2017 Election.

“This creates a consensus among the different interests and ultimately it’s the winning formula in my view for this election,” affirmed the analyst.

Here is the analysis: