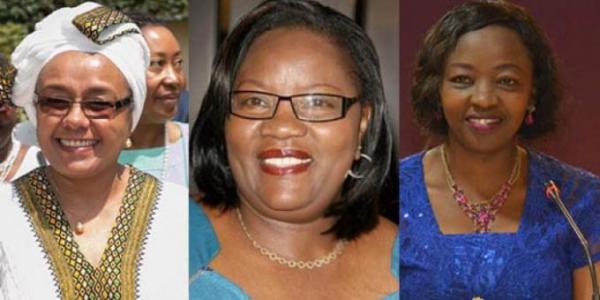 To many, these three ladies are just but renowned women and wives of Kenya’s most prominent political figures.

Nonetheless, a close look at their lives shows that First Lady Margaret Kenyatta, Rachel Ruto and Ida Odinga are teachers by profession.

66-year old Ida, wife to former Prime Minister Raila Odinga, has quite a long teaching background having taught for over 20 years since she graduated from the University of Nairobi in 1974 with a Bachelors of Arts.

It is at the University of Nairobi where she met her husband Raila who was at the time working at the same school in the Department of Engineering.

She taught at Kenya High school before she was hounded out of the job by the then KANU regime owing to her husband’s political activities.

Mama Ida is a woman celebrated for her grace and talent in leadership. She has championed for a host of causes – many focused on women, children and health in Kenya.

Deputy President William Ruto’s wife, Rachel, graduated from Kenyatta University with a Bachelor’s degree in Education in the 1990s.

Rachel gave up her teaching career to be a stay-at-home mother after getting married to the now deputy president.

A humble Rachel has been at the forefront in advocating for women empowerment – a cause she has dutifully taken up to create more favourable opportunities for women.

On January 17, 2014, Mrs Ruto was awarded the International Honorary Fellowship Award on Women Empowerment at the Binary University in Malysia.

However, it’s not clear whether Margaret had the opportunity to practice teaching, considering her affluent background.

She was born to former Director of Kenya Railways Corporation Njuguna Gakuo and her mother Magdallena who was a German.

Margaret, a noble and simple woman, has made it her personal call to fight for the lives of Kenyan mothers and children through her Beyond Zero campaign.

The campaign aims at creating awareness and raising funds to tackle issues that affect maternal and childbirth issues as well as mother to child transmission of HIV.

Incidentally, former First Lady Lucy Kibaki, one of the pioneer students of the prestigious Alliance Girls High School, also trained as a teacher and taught in several schools in Central and Nairobi before quitting.

VIDEO: Is this the man used by Governor Obado to murder Sharon Otieno?

Video:Kenyan Woman Insult Americans at a US Airport