Nicaraguan President Daniel Ortega has clinched a fourth term in office with a landslide victory — this time with his wife as his running mate.

With more than 98% of the ballots from Sunday’s election counted, Ortega had garnered 72.5% of the vote, state media said Monday.
First lady Rosario Murillo has long been the country’s unofficial co-president, effectively running the government, analysts of Nicaraguan politics say.
In August, when the couple made their ticket official, Ortega said she was the best running mate he could choose: “Who better (to be vice president) than my companera, who has so far done an efficient and effective job with much discipline and sacrifice.”
The move by Ortega, a socialist and former guerrilla leader, is not without controversy, as critics have accused the couple of skirting laws while building a political dynasty.
Nicaragua’s Constitution bars candidates who are relatives of the current President from running, however the Supreme Court of Nicaragua has said there was no legal impediment for the Ortega-Murillo ticket.
“It makes no sense,” said Eliseo Nunez, a former opposition lawmaker, maintaining that the ticket clearly violates the Constitution. “It’s like saying: My brother-in-law can’t run because he is related to my wife, but my wife can run.”
Adding Murillo to the ticket is a way for Ortega, who will be 71 in a week, to ensure a political succession plan, said Michael Allison, a political scientist with the University of Scranton.
“Daniel and Rosario have been consolidating power for over 10 years,” he said.
Despite cries of foul by opposition, Ortega has strong support in the country, Allison added.

Who is Daniel Ortega? 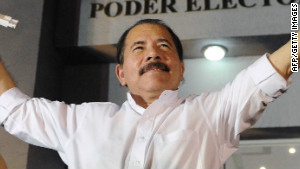 President Daniel Ortega
Ortega came to power as part of the Sandinista rebels who overthrew the Somoza dynasty in 1979. He fought against the US-backed contras during the 1980s and has remained a key ally to Venezuela.
He was first elected as president in 1985, and ran unsuccessfully in 1990, 1996 and 2001 before being elected again in 2006 and 2011.
Before Ortega’s term, presidents in Nicaragua were not allowed to serve consecutive terms, but that didn’t stop him in 2011.
In 2014, he used his power to pressure lawmakers to do away with term limits, allowing him to run in Sunday’s election.

Who is Rosario Murillo? 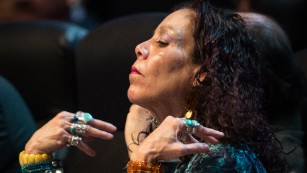 Nicaraguan first lady Rosario Murillo at 2014 summit in Havana.
Since her husband took office in 2007, Murillo has been by his side, offering a warm shoulder and smile to the country, reshaping Ortega’s brand by softening his image, and steering his political agenda. She is a writer, poet and avid activist.
Murillo has long been the face of Ortega’s administration, said Christine Wade, a political scientist and co-author of “Nicaragua: Living in the Shadow of the Eagle.”
“Some people consider her to be the power behind the man,” Wade said. “She’s played a very significant role in some of the popular social programs in Nicaragua. She’s the face of the administration, she runs Cabinet meetings and she has very popular radio programs.”
Murillo, 65, runs many of the country’s most widely embraced social programs — which remain popular among the country’s poor.
“He wasn’t particularly popular and neither was she,” Wade said. “She has really become a force to be reckoned with in Nicaraguan politics, for better or for worse, and I think that now she has been given a title that actually reflects the work that she has been doing all along.”

Ortega’s victory is a win that even his harshest critics expected. Many called the elections a farce and vowed not to show up at the polls.
Some opposition lawmakers have been kicked out of the electoral process and international monitors had initially been told to stay home during these elections, prompting an international outcry.
In September, a bill in the US Congress dubbed the NICA Act was introduced that would block American loans to Nicaragua unless it took “effective steps to hold free, fair, and transparent elections, and for other purposes.”
Ortega allowed the Organization of American States and other unnamed international groups to have a limited role in overseeing Sunday’s election, the Nicaraguan Embassy in Washington said.
But that didn’t convince critics, including the US State Department, which said on Monday that the Nicaraguan government had “degraded the legitimacy of the election.”

The U.S. is deeply concerned by the flawed presidential and legislative electoral process in #Nicaragua.
More: http://go.usa.gov/xkuEB

“In advance of the elections,” the State Department said, “the Nicaraguan government sidelined opposition candidates for president, limited domestic observation at the polls and access to voting credentials, and took other actions to deny democratic space in the process.”
–cnn.com