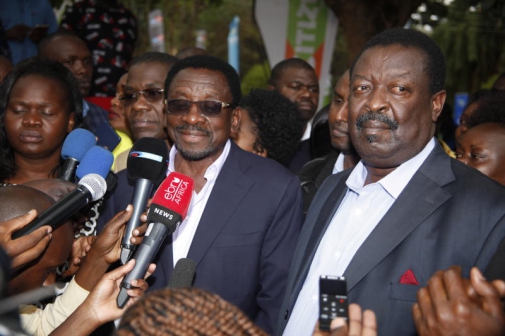 The National Super Alliance (NASA) Friday claimed that the Independent Electoral and Boundaries Commission was declaring the winner of the presidential vote in total disregard of their concerns. NASA agents Musalia Mudavadi and James Orengo stormed out of a meeting between IEBC officials and all chief presidential agents citing disagreements.

They said they would not put their signature on the final results. “It seems the commission was doing pure Public Relations when they asked us to share our grievances, all that was waste of time because they seem to have made their decision,” said Mudavadi soon after walking out of meeting at Bomas of Kenya.

Orengo faulted the foreign election observers whom he said did not give an honest verdict on the General Election. “The foreign observers should have been vetted to assess their relationship with the leaders in Kenya,” said Orengo.

The country had received election observers from, among others, the European Union, The African Union, Commonwealth, United Nations and the East African Community, whom the Opposition said gave a premature conclusion on how the election was conducted.

NASA had repeatedly complained that there were anomalies in the results that IEBC was streaming on its portal and wanted them audited before a final result could be announced.

The coalition had even shared results from their own tally that showed that Raila Odinga was leading with over 8 million votes against Uhuru’s over 7 million.

The Opposition leader Friday did not give press statements like he did on the days immediately after the vote. Amid the stalemate, the agents to the other presidential candidates appended their signatures and the electoral commission announced Uhuru Kenyatta as the president-elect for a second 5-year term.

Kenyatta reaches out to Raila after poll win