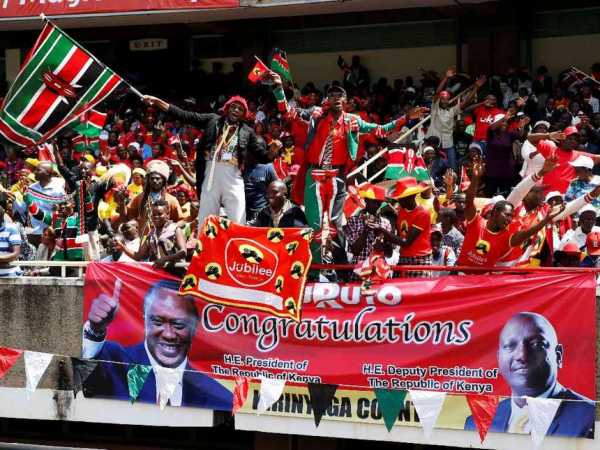 Grateful for the long journey that led to an official second term in office, Deputy President William Ruto led Kenyans in song at Kasarani stadium.

Ruto and President Uhuru Kenyatta made their pledges on Tuesday after Chief Justice David Maraga announced they were duly elected for anoter five years in office.

NASA candidate Raila Odinga pulled out for lack of reforms at IEBC and gave a list of “irreducible minimums” that were not acted upon.

Gospel singer Ben Githae opens up about his baby mama…

He is now leading a National Resistance Movement.

Ruto started his speech with a popular Kiswahili gospel song that says there is no one like God.

The DP noted the culmination of the election was a reason to give thanks.

“This election was different and special. For the first time, it was decided two times because it was about issues that affect Kenyans.”


People celebrate as President Uhuru Kenyatta takes the oath of office during his swearing-in at Kasarani stadium in Nairobi, November 28, 2017. /REUTERS

Ruto offered Uhuru his “total support” and said theirs will be to build bridges across all communities. Following instruction by Raila, voters in Siaya, Kisumu, Migori and Homa Bay counties boycotted the election.

As a result, leaders in NASA have termed Uhuru and Ruto the rulers of a minority. The two now have the uphill task of uniting the country.

The DP reiterated the President’s call for Kenyans to resist ethnicity, hate and violence.

“What’s important to us going forward is the transformation of our country, development and peace. These will be achieved with justice. Justice is brought about by peace, coexistence, the rule of law and respect for constitution.”

The leaders congratulated the President and wished the country the best.

Ruto then invited the President to give his address.

“LESSER EVIL” IS THE COMMON LANGUAGE IN NAIROBI STREETS TODAY