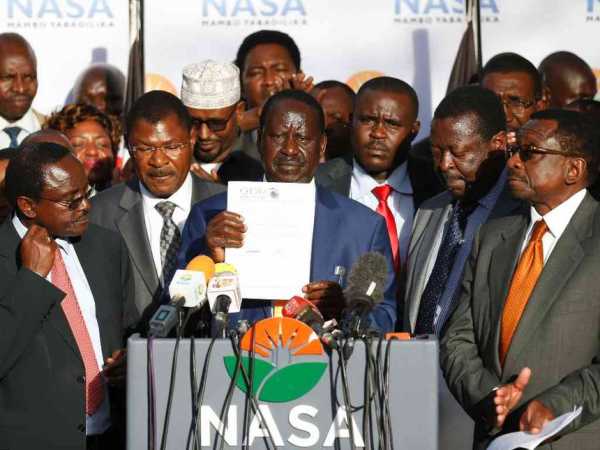 Raila, the once future President, found himself alone. Three NASA principals did not support the much-hyped swearing-in of Raila Odinga as the People’s President, leading to collapse of the plan. Raila, the fourth principal, gave in. The pressure to capitulate was enormous.

There were fears of convulsive violence leading to deaths of innocent supporters, fears that Raila himself would be arrested and jailed for treason for life, fears his legacy would be irredeemably tarnished and his cause of electoral justice and democracy would founder.

NASA announced on Sunday that it had postponed the inauguration from today to a later date. Yesterday the Star learnt the decision to call off the ceremony was reached on Sunday after intense discussions among Raila, his family, NASA leaders and diplomats led by US Ambassador Robert Godec. It is understood Raila’s wife Ida told those pushing for Raila’s swearing-in to swear in someone else — not her husband.

She has avoided active politics since she lost her son Fidel in January 2015 and her daughter Rosemary fell sick this year. Ida and other family members were worried Raila could have been jailed for life if he had been sworn-in at the age 72.

“She was very clear the swearing-in was crazy and wondered where it came from,” a family member told the Star.

From the onset, the NASA principals were opposed.

Kalonzo Musyoka of Wiper, also NASA’s Deputy President candidate; Musalia Mudavadi (ANC) and Moses Wetang’ula (Ford-Kenya) all believed inauguration would hurt their cause. Separately and through lieutenants, they urged Raila to drop the idea. Kalonzo, tending to his ailing wife in Germany, raised objections through Wiper leaders, including Governor Kivutha Kibwana and Wiper deputy leader Farah Maalim. Mudavadi and Wetang’ula reportedly spoke with Raila several times last week and at the weekend and pushed for scrapping the idea. Their biggest fear was lack of a plan for what NASA would do after the oath was administered.

They feared a confrontation with the police — who said they would arrest ‘President’ Raila — that could have caused the deaths of many people.

“The question asked was what happens after Raila is sworn in? The fact NASA could not protect its supporters made it possible for old counsel to prevail,” a NASA MP told the Star. Even Siaya Senator James Orengo — who was once vociferously in favour of swearing-in — went quiet.

David Ndii, chair of the organising committee and a proponent of secession, is also said to have opposed the oath-taking. Only former Machakos Senator Johnson Muthama was steadfastly in support of the inauguration in Mombasa. This was despite warning that everyone involved would be arrested and charged.

US ambassador to Kenya Robert Godec made it clear to Raila the international community would not support his idea. He said swearing-in would be counterproductive and erode Raila’s democratic credentials. Yesterday Godec praised Raila’s move.

“NASA’s decision yesterday (Sunday) is a positive step. We again call for a sustained, open, and transparent national conversation involving all Kenyans to build national unity and address long-standing issues,” he tweeted.

On Friday last week, Godec led a powerful Western envoys’ delegation to Raila’s office where they pleaded with him to back down. The envoys urged him to avoid engaging in any illegal activity.

“I stress the need to uphold the Constitution. We urge the government, opposition and all Kenyans to engage in open, transparent national conversation,” Godec said on Friday.

Raila’s spokesperson Dennis Onyango said NASA is committed to dialogue on security reforms, securing and strengthening the Judiciary, devolution and governance structure. This was rejected by President Uhuru Kenyatta who ruled out any electoral reforms talks. Yesterday Uhuru again said he will not engage in endless politics at the expense of development.

Dismay and anger greeted the decision by NASA to postpone the swearing-in of Raila by supporters, some calling it an act of cowardice. Immediately after the postponement announcement on Sunday, NASA supporters said the coalition had let them down.

Supporters were furious with Raila’s long-time adviser Salim Lone, who tried to justify postponement. Ben Musungu, ODM National Youth Coordinator, said, “Disappointed to the core as was on my way to Mombasa. No phone calls. Don’t know anything,” he wrote on Facebook before pulling it down.

Kalonzo,Wetangula and Raila in South Africa ahead of Uhuru’s big day

PHOTOS:The most Dangerous Kenyan Alive: A profile of the elusive Mohamed Abdikadir