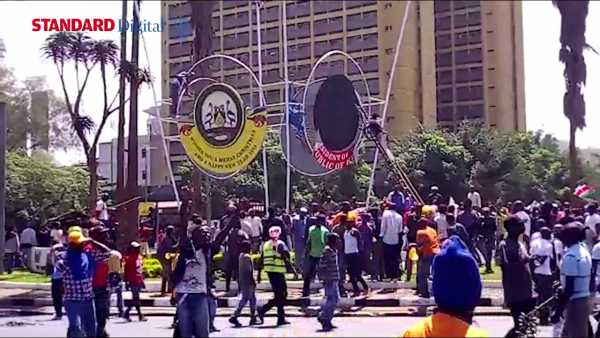 A section of the youth attending the National Super Alliance (NASA) ‘swearing-in’ at Uhuru Park have destroyed the banner at General Post Office (GPO) roundabout along Uhuru Highway and Kenyatta Avenue.

The rowdy crowd of about 20 men climbed the billboard, destroying part of it before carrying the court of arms into Uhuru Park.

A move that drew the ire and criticism of most Kenyans with some claiming it was the president advertising himself.

Police have since lobbied teargas to disperse the crowd that was also blocking traffic along those roads.

Thousands of NASA supporters are still waiting for the arrival of their leaders; Raila Odinga and Kalonzo Musyoka to begin the ‘swearing-in’ ceremony.

At around 11am, a section of opposition leaders led by National Assembly Minority Leader John Mbadi joined the group and assured them that the oath plan was still on course.

Mbadi maintained that Raila Odinga was expected at the venue at 12.30pm and that the ‘oath taking’ will be between 1pm and 2pm.

RECEPTION TO CELEBRATE KENYA’S PEACEFUL ELECTIONS AND TRANSITION TO…

NEW KENYAN AMBASSADOR TO US EYES PARTNERSHIP AND TRADE

ISAAC RUTO HINTS THAT HE MAY DITCH URP IN 2017