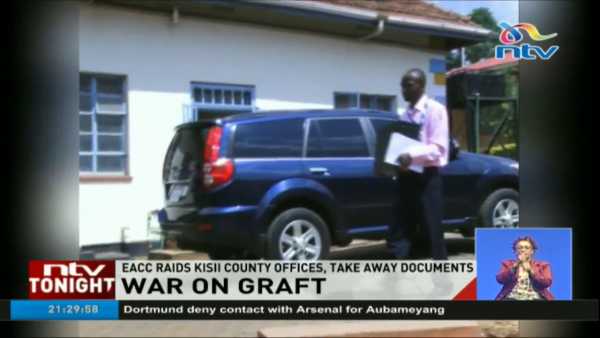 Ethics and anti-corruption officials in Kisii have seized crucial documents offering a glimpse into the irregular recruitment of staff in the county.

Some files of the files contain names with political interest marked as ‘interest of so and so’ a source at the Ethic and Anti-Corruption Commission (EACC) told Nation.

The commission has already begun perusing the files before they go for the masterminds of the scam.

“We already begun going through them (the files) and will do so with a fine toothcomb before we swing into action,” said a senior officer at the commission.

Deputy EACC boss Michael Mubea told Nation that the commission is interested in knowing how hundreds of workers were recruited into the county service in an “opaque and unprocedural manner”.

“There had been a flurry of complaints which we did not want to overlook. We have heard that some workers were being added daily into the payroll while there had been no adverts placed on the same,” said Mubea.

On Friday a team of officers from the commission’s Kisii offices conducted raids at the public service departments and the payroll section and carted away several files and computers as part of the investigations.

Mr Mubea Sunday said they are suspecting more people are involved in the shady recruitment.

He said they some executives in the county are suspected of rewarding friends with jobs in an unprocedural manner.

During the Friday raid, four computers and several files were confiscated from the payroll sections.

Mr Mubea said all the seized items will help uncover the scam.

“The irregular recruitment has been going on since the campaign period. This is the crux of the matter that we want unearthed,” Mr Mubea told Nation by phone.

An officer privy to the investigations said some powerful people are involved in the scheme of rewarding friends and girlfriends with jobs.

“We want to get to the bottom of it,” he told Nation.

Kisii is one of the counties with a bloated workforce scaling up the wage bill considerably.

Activists in the region have already raised the red flag on the arbitrary recruitments of staff.

“What we had been witnessing is goons and cronies being given jobs on a daily basis yet they had no qualification to deserve them. No adverts had been placed anywhere to show there are vacancies in the County,” said Mr Vincent Gekone of the Gusii Governance Watch (GGW).

The county has been reeling from one scandal after another in the recent years.

But in a rejoinder, Governor James Ongwae and his deputy Joash Maangi said they had set in motion internal investigations to unearth who was responsible for the irregular recruitment, adding that it was done during the campaign period.

“We are looking at it because this is something that was done as we were in the heat of the campaigns. Someone took advantage of the vacuum to do the recruitment,” added Mr Ongwae who is battling a petition in the High Court.

He added that he is keen to ensure he achieves what he had outlined in his manifesto.

“Any form of indiscipline must therefore be checked to ensure we are moving at the same pace and toward the same direction,” he said.

Mr Maangi said they read a “political witch-hunt” in the EACC raids.

In February, EACC officials raided the home of the former chief officer and later charged him in court for abuse of office.

The case is still dragging on in court.

TIME TO APPLY FOR GREEN CARD