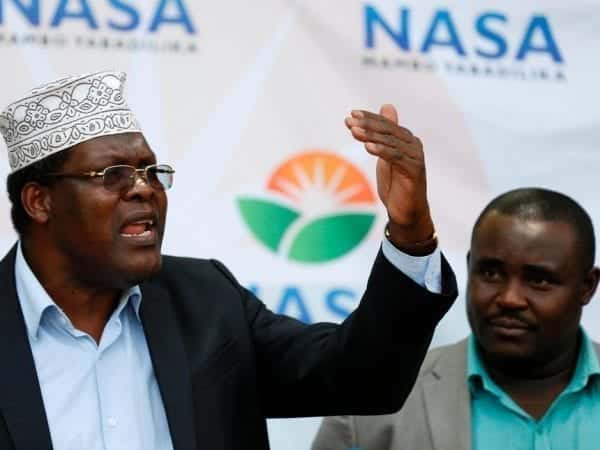 Ngunyi said this on Tuesday in his reaction to the drama that surrounded the government’s second attempt to deport the lawyer to Dubai.

Several journalists were roughed up by a bevy of armed police officers before Miguna was whisked away and put on a waiting Emirates flight.

Via Twitter on Monday night, Ngunyi said: “Instead of running his mouth and spitting when he speaks, he should read history. Raila not happy.”

Raila Odinga is the leader of the National Super Alliance who has turned from opposing President Uhuru Kenyatta’s rule to agreeing to a deal aimed at national healing and reconciliation.

Miguna says his approach to the political stand off over last year’s presidential election cannot hold.

Among those who responded to Ngunyi’s tweet was ‘@muteithiack’ who said Miguna has fought for the democratic space so an “armchair” analyst should at least respect that.

‘@dantozz’ said: “I think Miguna can make changes in this country. It’s high time Kenyans believed in his ideology. Miguna always speaks the truth and it’s rare to get such leaders.”

Thiongo Mwangi termed Ngunyi a “maize cob analyst who does not know Miguna is part of Kenya’s history”.

‘@nderituw’ wrote: “You know you are right when the majority don’t agree with you or don’t seem to understand what you are talking about.”

‘@glemaxkijana’ told the analyst to do something with significant effects on Kenyans’ lives instead of hanging onto others’ backs to look relevant.

Kefa Nyaboga said “It’s because of people like Miguna that we have a black man living in that government house up the hill. Home guard!”

@adusdusi said: “Mind your own business. We will not allow dictatorship in Kenya.”

One Ukweli Mbele commented: “Thanks. You’ve found a loophole to mention Raila. At least you have a job today due to the return of Miguna. That’s why you studied law.”

Migire Migire scolded Ngunyi saying he did not tag the lawyer innthe tweet as he was afraid.

“You are dead scared of his reply. What a coward,” Migire said.

Miguna is known for speaking boldly and sometimes harshly on various issues,be it on social media of national television.

‘@GmacDuncan41’ wrote: “While sitting down, a wise man can see farther than a fool on top of a building”.

Miguna spent his night at the JKIA departure lounge after the Emirates pilots refused to fly him to Dubai as planned.

After he was forced into the plane by police who tore his clothes, the pilots declared him a hostile passenger and ordered him to leave.

They had waited one and a half hours, jeopardising many passengers who were to connect to other destinations.

Earlier, Opposition lawyer and Siaya Senator James Orengo told journalists that intelligence officers, dressed as if they were employees of Emirates Airlines, told them they had instructions to take Miguna to the aircraft.

Orengo said it was unfortunate that the episode played out in the full glare of international visitors. He said Miguna might be deported again.

Raila will Kill the Big Four