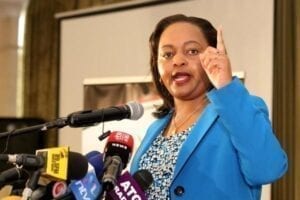 Through a statement dated April 7, Waiguru urged the youth to help her identify the goons who she refers to as ‘enemies of development’ and apologized to DP Ruto for the embarrassing incident.

Here is the Governor’s official statement:

“A very unfortunate incident was witnessed in Kerugoya; Kirinyaga County during an official visit by His Excellency Deputy President William Ruto on April 6, 2018 where a few goons hired by the County Women Representative Purity Ngirici and Andrew Ngirici made attempts to disrupt the meeting.

That the politicians would want to disrupt a meeting graced by His Excellency the Deputy President, aimed at bringing development in Kirinyaga and improving the living conditions of our people is not only selfish but also utterly preposterous.

This is an archaic style of politics that prides itself in ensuring the people remain in an impoverished state so that they can wholly depend on handouts from politicians. We cannot allow this kind of politics in Kirinyaga.

On August 8, the people of Kirinyaga gave me a five-year mandate to serve them and fulfil my pre-election promises to them. I will not be distracted in my drive to initiate development in Kirinyaga by premature contest over 2022 governorship elections.

My focus is on creating jobs for the youth of Kirinyaga, improving healthcare, upgrading our road network and improving agriculture, among other projects, because these are the things that matter most to the people of Kirinyaga.

I urge the youth to join me in calling out these enemies of development and desist from being used to further their personal political ambitions.

Politicians should seek remedy elsewhere for their campaign hangover, time for politicking is over. What the people of Kirinyaga want is development, and that is why they elected me governor.

On behalf of the people of Kirinyaga, I wish to convey my sincere apologies to His Excellency Deputy President William Ruto for the embarrassing incident witnessed on Friday and promise that such scenes will not happen again. “

Joho’s deputy in trouble for attending JAP rally in Malindi

Video:Kenyan choir from Kenyatta University to perform in Ohio