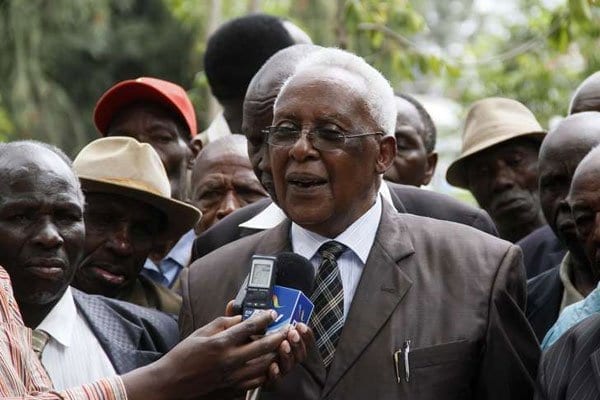 In a move likely to irk insiders in the President’s camp, the elders demanded that Mr Kenyatta declare his stand on Mr Ruto’s candidature to heal the cracks threatening to bring down Jubilee Party.

The elders, led by their patron Gilbert Kabage, spoke after a three hour-meeting at a Nakuru hotel convened to deliberate on the growing disquiet in the ruling party, among other issues.

They met against the backdrop of serious differences within the party even after a crisis meeting held by MPs from Mr Ruto’s Rift Valley backyard at Weston Hotel in Nairobi last week.

“We challenge President Uhuru Kenyatta to come out clear and say whether he still supports Deputy President William Ruto’s 2022 presidential bid. Does he still support him or has he changed his mind?” asked Mr Kabage.

The elders repeated assertions by Senate Majority Leader Kipchumba Murkomen last week that a clique of “individuals serving within government at the Office of the President” are fuelling the problems in Jubilee.

They claimed that a group of prominent people from Mt Kenya region were holding night meetings and plotting Mr Ruto’s downfall.

Those in the meeting included Mr Joel Koech (vice-chairman), Mr Peter Charagu (secretary), and John Kahato (organising secretary), among others.

They asked President Kenyatta to explain what the March 9 handshake with opposition leader Raila Odinga entailed to end speculation regarding the deal.

According to Mr Kabage, such an explanation would end rumours that the handshake was aimed at scuttling Mr Ruto’s 2022 presidential ambition.

“To calm the storm that threatens to tear apart the Jubilee Party, we request the President to give details of the ‘handshake’ between him and the former prime minister,” said Mr Charagu.

The elders also warned a section of Mount Kenya leaders from meddling in Rift Valley politics, even as they reiterated that the region fully supports Mr Ruto’s 2022 bid.

They also asked Rift Valley leaders not to allow strangers to divide them ahead of 2022 elections.

“We urge all leaders, including Baringo Senator Gideon Moi, to unanimously support Mr Ruto, who is the Rift Valley political kingpin and is a stone’s throw from the presidency. We need not gamble with this chance,” said Mr Joel Koech, an elder.

Both Mr Ruto and Mr Moi have declared their interest in running for the presidency in 2022.

A number of sources at yesterday’s meeting reliably confirmed to the Nation that the elders firmly stated that they “will not allow anything to stand in the way of Mr Ruto’s presidential bid”.

The elders also supported President Kenyatta’s directive on a lifestyle audit for all government officials but demanded that it start from 1963, when Kenya gained indepedence.

“The lifestyle audit is timely, but we suggest that it looks into past governments since 1963, when Kenya gained independence.

‘‘We fully support the President’s bid to uproot corruption and plunder of state coffers, which should net big fish. Let all prominent people involved in corruption face the law,” said Mr Kabage.

Truth meter Drama: Kibaki has no apology for his language-Video