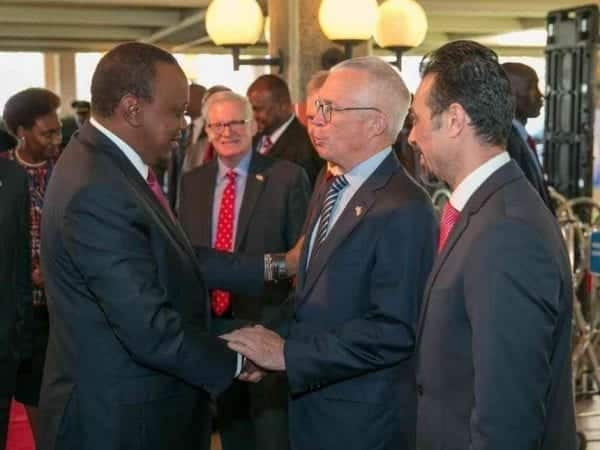 US Under-Secretary for Commerce Gilbert Kaplan is leading the 60-member delegation from the US Presidential Advisory Council on Doing Business in Africa.

The conference organised by the US Chamber of Commerce is aimed at interrogating Uhuru’s BIg Four Agenda for investment opportunities. Te key points are affordable housing, food security, universal healthcare and manufacturing.

At the opening of the meeting on Thursday morning, the President challenged the American and Kenyan private sectors to take advantage of opportunities presented by his plan

“Given our long and well-established relationship, we can do more together. I invite US companies to walk with us on the Big Four journey,” he said.

In his statistics ladden speech, he noted that the US private sector has a competitive advantage in housing, health technologies and pharmaceuticals aspects that his administration wants to tap into.

“In addition to the resources, we anticipate that American investors willbring in knowledge and technology transfer,” he said.

Kaplan, who spoke before Uhuru, said the US is committed to supporting the Kenyan agenda by driving American investments into the country.

The secretary noted that Kenya’s business environment has improved remarkably under Uhuru.

DEALS WORTH MILLIONS OF DOLLARS

The deals agreed upon cover both public and private sector investments and will mostly be channeled into the Big Four.

They include a $20 million deal with American firm Medtronic for a medical dialysis centre whose scope will cover strengthening specialised medical services in the country.

Others are a partnership agreement between Rendeavour and Unity Homes for the construction of 1,200 affordable homes in Tatu City in Kiambu County, at a cost of $40 million and a $10 million credit line from World Business Capital, a global small and medium enterprise financier, to Victoria Commercial Bank.

There is also a projects and investments financing arrangement with USAID Power Africa, designed to enable Kenya achieve its objective of ensuring universal electrification by 2022.

The  project will provide KTDA, a leading global exporter of black tea, with approximately 30 MW of reliable electricity and reduce operating costs at its tea factories.

Uhuru also oversaw the signing of an agreement bya  leading US energy company for supply and commissioning of East Africa’s largest off-grid solar and battery system. The 1260 kWh battery system will be installed at Serena Safari Lodge in Amboseli National Park.

At the conference at the expansive UN Complex in Gigiri, the delegations will establish mechanisms for improving Kenya-US trade which is currently in favour of the US.

Recommendations include deepening the understanding of the US market by Kenyan traders and fashioning ways of supporting Kenyan exporters to comply with US market requirements and standards.

Kenya is also keen on increasing awareness and knowledge in public and privater sectors of the AGOA trade pact, which has for years provided a big window for Kenyan goods to reach the US.