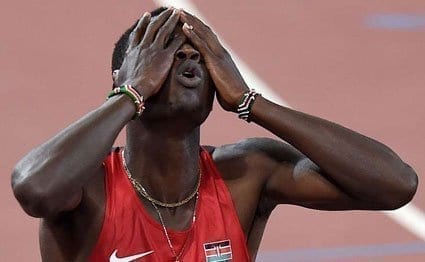 Kenya is mourning after losing one of her elite athletes in a grisly road accident in Nandi County on Wednesday morning.

World 400m hurdles champion Nicholas Bett lost his life after the car he was driving veered off the road and landed in a ditch near Lessos along Eldoret-Kapsabet road.​

Nicholas Bett is the second born in a family of three.

Bett was the first Kenyan to win a Worlds gold in hurdles in 2015 in Beijing, China.

He has a twin brother called Haron Koech, who is also in the Kenyan Olympics team.

His demise sent social media into a frenzy as Kenyans eulogised the fallen giant.

The death of World Champion Nicholas Bett: What we know so far!

Reaction from Government, athletes and Kenyans:

It is a sad morning to athletic fraternity following the loss our own Nicholas Bett, former 400M hurdles World Champion. I wish send my deep condolences to his family. Our prayers and thoughts are with you during this difficult time. pic.twitter.com/xdRILp73vV— Mercy Cherono (@Mercherono) August 8, 2018

Former 400m hurdles World Champion Nicholas Bett has died in a road accident in Nandi County. On behalf of the sporting fraternity and @moscakenya I convey my sincerest condolences to his family .Rest in peace . pic.twitter.com/SUT5yaZAvC— Rashid Echesa (@CSRashidEchesa) August 8, 2018

A sad day for Kenya as we wake up to the sad news that the former 400M hurdles World Champion Nicholas Bett has died in a road crash in Nandi, the family and Nandi Police Commander Patrick Wambani have confirmed. Condolences to family, friends and all Kenyans. #RIPNicholasBettpic.twitter.com/c9yHx32xUB— Brian Odeoh ???????? (@BrianOdeoh) August 8, 2018

Social media is good but to wake up and learn the demise of Nicholas Bett isn’t good at all. My heartfelt condolences to the family, relatives and Athletic fraternity following his sudden death. Poleni sana and may God console you all.— Benard (@Benardlanga) August 8, 2018

This morning Kenyans woke up to sad news of the untimely demise of Nicholas Bett, the former 400M hurdles world champion, in a road crash in Nandi. Utmost condolences to his family, friends and all Kenyans. #RIPNicholasBettpic.twitter.com/g1BKCwjc1C— Victor Mochere (@VictorMochere) August 8, 2018

Nicholas Bett you made Nandi and Kenya at large so proud worldwide.
Hats off for you legend ????
Rest in eternal peace bruh…#RIPNicholasBett pic.twitter.com/BS5QLt3JD3— KELVIN KALZ (@ItsKelvinKalz) August 8, 2018

I am saddened by the sudden death of our beloved brother,Nicholas Bett who was a real hero in the field of athletics specifically in 400m hurdles. Rest in peace pic.twitter.com/pzktA9wheN— Hon.Kipkemoi Chumba Nicholas (Noah melit kolandech (@KipkemoiChumba1) August 8, 2018