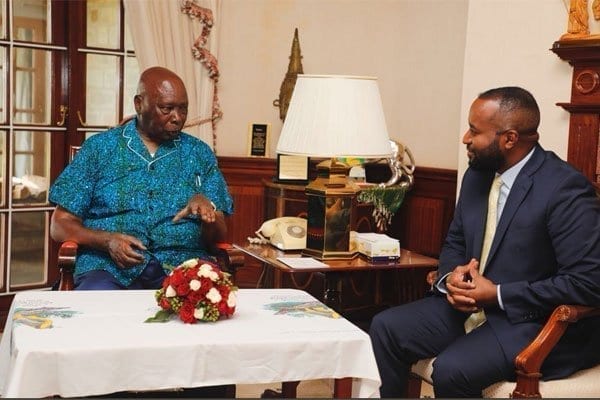 It was Mombasa Governor Hassan Joho’s turn to visit retired president Daniel arap Moi on Saturday amid heightened talk of a political alliance in the offing with the scion of the former head of State, Baringo Senator Gideon Moi.

Mr Joho first got the “blessings” of the retired president at his Kabarak home in Nakuru before proceeding to fundraising meetings in Samburu and Baringo.

Mr Joho’s meeting with Mr Moi came a few months after he (Mr Moi) “snubbed” Deputy President William Ruto when he visited him at his home.

The two were then joined by a number of leaders from the Rift Valley and Coast regions.

POLITICAL ADVICE
An MP from the Coast said: “The governor found it wise to pass by and meet Mzee Moi. He was then given some political advice and we hope it is for his betterment.”

Mombasa County official Idris Abdiraham, who is Mr Joho’s former political adviser, said the governor was in Kabarak to receive “words of wisdom” from Mzee Moi.

In his statement, Mr Joho said he got the opportunity to get advice from Mr Moi on “national issues”.

“A nation rarely gets the opportunity to look back and fix its divisions. History is full of countries that have gone down the wrong path, but through the grace of God and wisdom of HE Raila Odinga and HE Uhuru Kenyatta, we now have a unique opportunity to change the future of this country,” Mr Joho said.

He urged Kenyans to “embrace this second chance of building a new Kenya”.

PEACE DEAL
According to political commentators, Mr Joho has been using the peace-pact between President Kenyatta and Mr Odinga to politically undermine Mr Ruto and cut the image of a national politician with a view to playing a prominent role in national affairs after the end of his term as governor.

For instance, he has on several occasions reiterated that the “handshake” has given him an opportunity to negotiate on matters of importance to the people of Kenya.

And Saturday’s meeting comes barely two months after Mr Joho hosted Senator Moi in Mombasa where the two announced a unity deal ahead of 2022 elections.

The two leaders, who have both declared interest in the presidency in the next General Election, said they will unite “in changing the people’s lives”.

The Kanu chairman termed the ODM deputy leader is an “extremely important person in the political equation of the country”.

The two said they will traverse the country to “unite Kenyans”.

During the talks, he hinted at the possibility of forming a political party to push for the region’s agenda ahead of the 2022 elections.

The two governors also said they would be meeting with the other four governors from the region on September 7 to discuss the unity of the region.

The meeting with MCAs was also seen as a strategy to lock out the Deputy President and other presidential hopefuls from making inroads at the Coast.

Mr Ruto has visited the Coast more than 10 times in the recent past and is believed to be making inroads in the region, which was dominated by opposition Nasa.

A majority of MPs from the region have in the past promised to support him in his bid for the top seat. This could have influenced Mr Joho’s decision to reach out to the MCAs.
-nation.co.ke

‘RACIST’ CHINESE RESTAURANT DOUBLED UP AS A SEX DEN