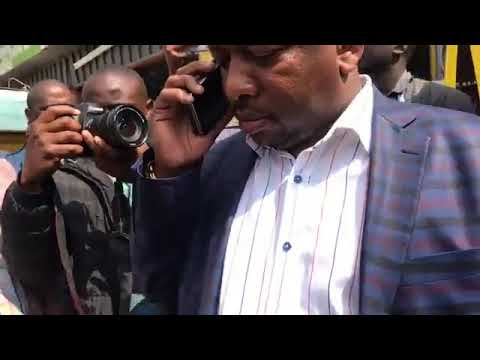 Nairobi Governor Mike Sonko on Friday supervised the recovery of public land that had been grabbed and a private car showroom built on it in Gigiri.

Sonko said the parcel of land was set aside for construction of a fire station, but a private developer moved in and put up the showroom.​

He ordered three county engines to be deployed at the showroom, adding that it will now act as a fire station.

“This is public property that was meant for a fire station. From today, we have reclaimed it and we shall have a modern fire station built here,” said Sonko.

Goreti Gichuru, the proprietor of the showroom, asked the Governor to give her sometime so that she could vacate.

“Governor, I’m ready to obey the law, but we are humbly requesting for more time so that we can vacate this land,” she said.

The county fire brigades will be stationed in the area.

Earlier in the week, Sonko took to social media to order those who operate their businesses and live on grabbed land to leave as soon as possible. He also promised to surrender his house, which he said was built on a road reserve.

“Better be a one-term governor and leave a legacy than entertain grabbing of public land and utilities,” Sonko wrote on Facebook.

He told those living or doing business on grabbed land to remove their valuables.

The governor further said all grabbed land in the city’s estates that was meant for playgrounds should be returned to the Government.

He also told those who have built houses on land meant for public social halls, over sewer lines and the Nairobi water pipeline to vacate.

Land meant for a market in South C and a police station at Nyayo estate were among those Sonko said were targeted for repossession.

My support for DP Ruto will not change, vows MP Jumwa