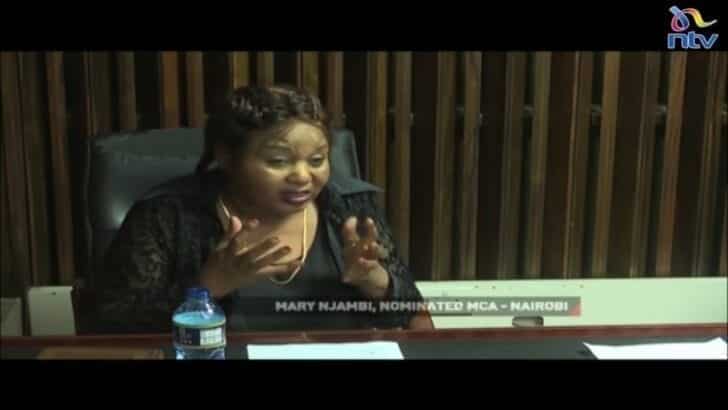 A Nairobi MCA who was the chief heckler during the chaotic eviction of former speaker Beatrice Elachi says she has seen the light and is now born-again.

Mary Njambi made the confession while being grilled by the Powers and Privileges Committee on Thursday on photos that captured her taking alcohol moments before the eviction of Elachi from office.

Njambi was among six MCAs who were pictured seemingly getting ready for the showdown at City Hall by gulping bottles of alcohol bottles and taking selfies.

VIDEO: Karen Nyamu says she did not know Samidoh was married

One of the male MCAs in the picture, Anthony Kiragu, denied taking alcohol, insisting that he met his colleagues for a chat.

“For the avoidance of doubt I don’t take alcohol. Personally I meet a lot of members, I have 121 members, friends in this assembly we meet often, so I don’t know where the photo was taken,” said Kiragu.

Njambi kept the drama going for hours at City Hal, pushing, screaming, shoving and doing some unthinkables as they piled pressure on Speaker Elachi to vacate her office.

Even a pepper spray by Ms Elachi could not deter her as she vowed: “Ametuwekea pilipili but hatujali. Lazima aende.”

DEVOTION:WHAT WOULD BE YOUR RESPONSE?

On Campus Accommodation At The University Of Alabama In Huntsville

Video:Kenyans hold a Peace Rally at the Lincoln Memorial in Washington, DC