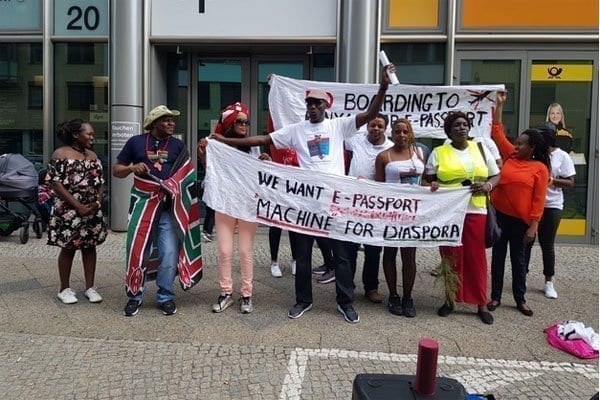 The Kenyans, who camped at Kenyan Embassy in the German capital, also cited poor services at the embassy, saying they were being compelled to travel back home to renew their passports.

They narrated how they are harassed and delayed whenever they travel back home to renew their passports.

“Passport processing has been an issue for a long time and the question I ask myself is why? I hoped to have this question answered when President Uhuru Kenyatta visited Germany,” said a protestor.

He went on: “The Kenyan ambassador to Germany said that Kenyans would renew their passports here in Germany, but this is yet to happen.”

The Kenyans want the processing of passports done in Germany at affordable cost.

They also demonstrated against corruption in Kenya saying the vice is killing the nation.

“It’s good to commend the Directorate of Criminal Investigation and Director of Public Prosecutions for the great work they are doing, the two need more support to do their work efficiently,” said a demonstrator.