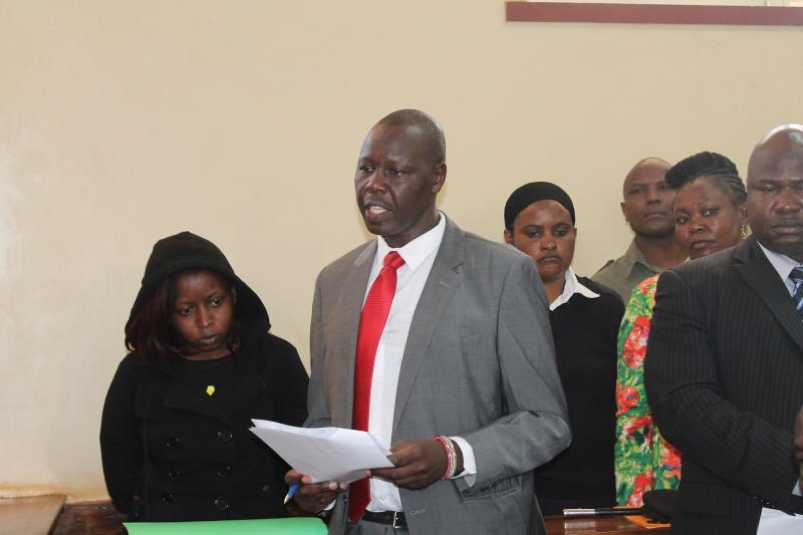 TV journalist Jacque Maribe and her fiancé Joseph Irungu had a bitter confrontation on the night Monica Kimani was murdered and the day after.

On the night of September 19, when Monica is believed to have been killed, Irungu, wearing pajamas and a pair of slippers, burst into a club in Westlands, Nairobi, visibly angry, police say.

Earlier that day, Irungu had been spotted walking into Monica’s apartment at Lamuria Gardens off Dennis Pritt Road dressed in a kanzu, a piece of which has since been recovered from ashes of items he set on fire.

Irungu had been looking for Maribe until about 2.30am (September 20) when he traced her to the club where she was partying with her colleagues and friends.

Maribe was seated at a corner on the rooftop of the popular 40Forty Lounge, with a group of well-heeled Kenyans. When Irungu tried to enter the area, he was stopped by security prompting an altercation.

Witnesses have told police Irungu was in the company of seven other men when he arrived at the club.  Maribe’s company is said to have exited a few minutes later, leaving Maribe, Irungu and other revelers at the club. The lovers quarreled before they left together.

At 1am on Friday, September 21, the two were together with other revellers at a different club in Kilimani when another brawl erupted.

A witness said Maribe might have made a comment that upset Irungu, prompting the altercation. She shouted at him demanding her car keys and ATM cards, a witness claimed.

“They left their table as if to talk outside, but they did not come back,” said another witness.

Maribe, in her statement, has named some of those present at the club. The police say they may call those named as a formality to confirm the claims.

It was then that they drove to Maribe’s Royal Park residence in Lang’ata, where Irungu is alleged to have tried to commit suicide using a pistol.

Maribe has changed her earlier statement and told police that Irungu tried to commit suicide in her house.

Immediately after the shooting, Irungu went to Maribe’s neighbour Brian Kasaine’s house and woke him up, telling him to take his (Kasaine) gun. The weapon was still in Maribe’s house.

Kasaine has told police he went to Maribe’s house and took the pistol, which had 28 bullets then. He also collected one spent cartridge.

Maribe and other people, who have been questioned, first took Irungu to Nairobi West Hospital, but he was not attended to in unclear circumstances.

They then drove to Kijabe Hospital and later to Lang’ata Hospital, where he was admitted until September 24.

They then went to Lang’ata Police Station and told police they had been attacked outside the house by three men who drove off on a motorbike.

Maribe went back to the house and she, together with her house girl, cleaned the scene of crime and allegedly destroyed what police have termed key evidence. The house girl has also recorded a statement.

Kasaine was arrested after the pistol and  50 bullets were found in the ceiling of his house.

Irungu and Maribe are key suspects in the murder of Monica.

Maribe says she was not with Irungu when the murder happened on September 19, as she was at her place of work at Citizen TV.

Citizen TV and Lamuria Gardens, where the body of Monica was found, are about 200 metres apart.

Police have since placed Irungu at the scene of the murder. The body of Monica was found in a bathtub in her apartment, the throat slit.

The murder weapon, believed to have been a knife, is yet to be found